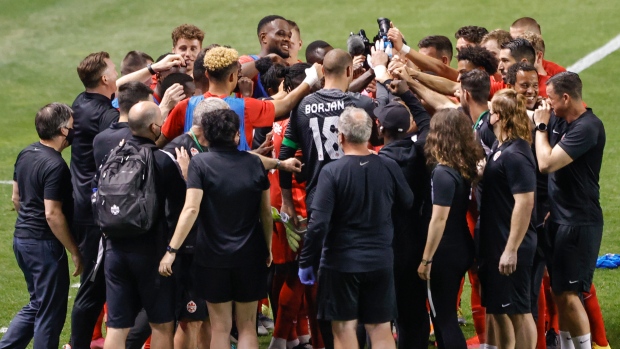 With only two months remaining until World Cup 2022 kicks off in Qatar, the TSN Soccer panel looks ahead to Canada's first appearance in world football's premier tournament since 1986 with Countdown to Qatar, the Canada preview show.

Ahead of a pair of friendlies in Europe this week that will offer the final look at the CanMNT ahead of the World Cup, the panel will set up the matches against hosts Qatar and Uruguay and we will hear from Canada manager John Herdman for his thoughts. Uruguay, featuring the likes of Liverpool forward Darwin Nunez, Real Madrid midfielder Federico Valverde and Rodrigo Betancur of Tottenham Hotspur, presents a major step up in calibre of opponent from CONCACAF qualifying. What can Canada learn from playing a South American heavyweight as they prepare to meet Belgium in their first match on Nov. 23?

Canada had no issue scoring goals in qualifying, scoring a CONCACAF-high 23 goals in 14 matches, but will that remain the case against Belgium, Croatia and Morocco in Qatar? The panel will look at how members of Canada's attack have started their club campaigns with Jonathan David starring at Lille and Cyle Larin struggling for playing time in his first season at Club Brugge. Just how big a factor will Vancouver Whitecaps forward Lucas Cavallini be?

What about the midfield? While Stephen Eustáquio has been getting regular minutes at Porto, injuries to the likes of Atiba Hutchinson, Tajon Buchanan and Mark-Anthony Kaye mean that some of Canada's best midfielders are sorely lacking game time ahead of Qatar. How will this challenge Canada's depth in the middle?

While Canada's players developed a brotherhood over CONCACAF qualifying, difficult decisions await for Herdman and the CanMNT braintrust when it comes to selecting a final 26-man team. The panel will weigh in on the difficulty of picking a roster with injury considerations playing a factor. Could the team go to Qatar without talisman and longest-serving player, captain Atiba Hutchinson? How do the injuries to Osorio and Buchanan factor into the equation? Will any of the new faces like CF Montreal defender and Espanyol striker Luca Koleosho force themselves into the conversation?

TSN Senior Correspondent Rick Westhead will also drop by with the latest on the dispute between Canada Soccer and its players.