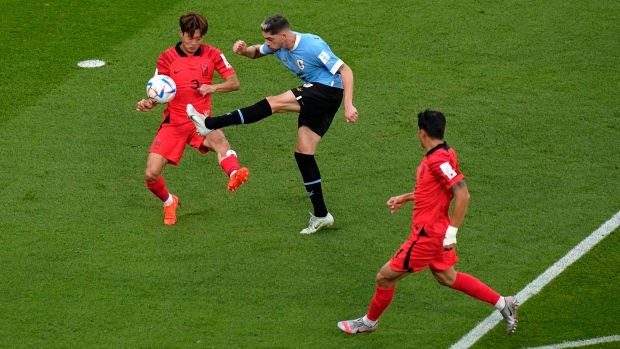 28th-ranked Korea Republic controlled possession for a lot of the first half, but 14th-ranked Uruguay had the more dangerous chances in what has been an even and tightly-contested match in the opener for Group H.

Korea Republic held consistent possession in the last 10 minutes of the half, but it was Uruguay that generated a close attempt - a set piece after a foul found it's way to the head of Darwin Nunez, which bounced off the Korean post and was cleared moments later.

Action settled down midway through the first half, but Korea Republic found their first real threat for a goal in the 34th minute, when some nifty passing in the crease set Hwang Ui-Jo with a clear shot 18 feet that he sent just over the cross bar.

Neither team was able to put together meaningful scoring opportunities until a great pass from Uruguay's Jose Maria Gimenez set up Federico Valverde with a great try at the top of the crease - he shot the ball just over the crossbar at the 19th minute.

Gimenez found Nunez moments later with another deep pass in the crease that resulted in a golden opportunity in the danger zone which Nunez and subsequently Luis Suarez were unable to put on net.

Korean Republic controlled the pace in the first 10 minutes as they dominated possession, and a clear plan of attack was executed on the right side - repeated deep passes to Na Sang-Ho sought to attack a perceived weakness in the Uruguay defence. No scoring opportunities of note were found in that plan early.