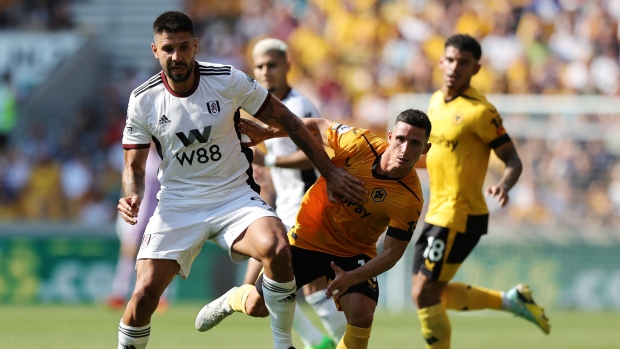 WOLVERHAMPTON, England (AP) — Wolverhampton goalkeeper Jose Sa saved a late penalty by Fulham striker Aleksandar Mitrovic as the teams played out a 0-0 draw in the Premier League at Molineux on Saturday.

Mitrovic, who scored twice last weekend in Fulham’s opening-round 2-2 draw against Liverpool, was handed the chance to snatch all three points for the Londoners in the 81st minute.

Mitrovic was looking to score his 45th league goal in as many appearances after his record-breaking haul in the second-tier Championship last season.

Neto’s angled drive, after he was picked out by Daniel Podence, was blocked before the Wolves forward headed the rebound back across the face of goal.

Hwang then sprinted into a one-on-one with Rodak after Neto’s excellent pass and his effort was also blocked.

Mitrovic’s wild volley over the top in his side’s first attack was met with huge cheers by the home faithful, but Fulham threatened again soon after.

Cordova-Reid’s downward header from Andreas Pereira’s corner was cleared by Neves close to the goal-line.

Rodak’s mistake then presented Neto with another opening, but he missed his chance to take aim at an open goal and Podence skewed the loose ball wide.

The home side should have broken the deadlock in the 53rd minute. Ait-Nouri’s perfect low cross presented Morgan Gibbs-White with a tap-in, but the England Under-21 forward failed to convert.

Wolves boss Bruno Lage sent on new signing Goncalo Guedes for his first appearance in the 57th minute, with Hwang making way. The Portugal forward’s darting runs helped stretch Fulham’s defense, but the visitors held firm at the back and continued to pose problems of their own going forward.

Mitrovic and Gibbs-White clashed in stoppage time as tempers flared after Mitrovic's late challenge, with both players leaning in with their foreheads to earn themselves a booking.