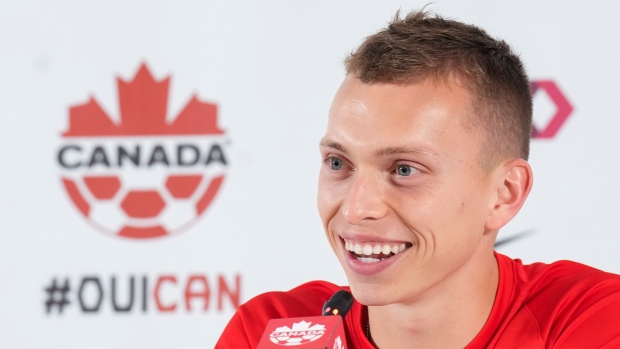 UMM ŞALĀL ‘ALĪ, Qatar — While the pressure is on Canada to get points out of its game Sunday with Croatia to preserve any chance of moving on at the World Cup, defender Alistair Johnston says the Canadian men are unfazed.

The Canadians find themselves in a hole at the bottom of Group F after their 1-0 loss Wednesday to Belgium. Another defeat will end their chance of advancing to the knockout round.

Johnston says 41st-ranked Canada is up to the challenge.

"We know wherever we play here, we're going to have an unbelievable Canadian crowd," he said after training Friday. "We know that we can play at this level. We know that the moment's not too big. I think having that now in kind of our back pocket after playing against Belgium in that opening game has only helped the group.

"I mean the morale is unbelievably high. I've never seen that after a loss before. The guys are still, obviously, frustrated that we didn't find a way to get something out of that game but at the same time we went toe-to-toe with one of the best teams in the world."

Still, Johnston knows the Canadians need more than another good performance. They need a result.

So do the 12th-ranked Croatians, who had to settle for a scoreless draw with No. 22 Morocco in their opener.

Back in Croatia, Canada coach John Herdman made headlines for a pitchside interview that saw him asked what he had told his players in a post-game huddle following the Belgium loss.

"I told them they belong here and we're going to go and eff--- Croatia," he said with a smile. "That's as simple as it gets."

A popular Croatian tabloid, 24sata, put Herdman's head on a naked body with a Maple Leaf covering his mouth and a much smaller one down below with a headline that roughly translates to "You have the mouth. But do you have the balls?"

"We have to and we will certainly talk about it. It can only motivate us," he said, according to Croatia Week..

Johnston, a 24-year-old CF Montreal defender with the gift of the gab, downplayed the off-field controversy.

"Look we know it's a massive game. This is a team that finished runners-up in the last World Cup. It's an unbelievably talented group. They don't need any extra motivation. So I bet they were looking at it like 'OK, who's this team that we probably never heard of until a couple of months ago and talking a big game?'

"But we believe in ourselves. We believe that we can back it up. And at the end of the day, no matter what's said, no matter what pictures are posted in tabloids, it's all going to come down to what happens in those 90 minutes on the field. We understand that and we feel really good about that. "

Croatia will have four points if it can dispatch Canada. And no matter happens in the Belgium-Morocco game in the Sunday's other Group F matchup, one of those teams will also finish the day with four points. A loss Sunday and the Canadians can finish with no more than three points.

Canada's final group game is next Thursday against Morocco.

Johnston has started 29 straight games for Canada, a men's national team record. He moved past Bruce Wilson, who captained Canada at the 1986 World Cup and played 27 straight, in the Canadians' final pre-tournament warmup — a 2-1 win over Japan on Nov. 17 in Dubai.

Johnston's senior debut coincided with Canada's opening World Cup qualifying match against Bermuda in March 2021. He won a second cap against the Cayman Islands before missing out on a game against Aruba in June 2021.

He was back for a match with Suriname later that month and has not missed a game since.

The young fullback/wingback has come a long way since being taken 11th overall by Nashville SC out of Wake Forest in the 2020 MLS SuperDraft. Montreal spent big to get Johnston from Nashville, giving up US$1 million in general allocation money last December to get him. It then signed him to a new two-year deal with options for the 2024 and 2025 campaigns.

Now he has been linked with a move to Glasgow Celtic.

Johnston managed to deflect the transfer talk while talking up the Scottish powerhouse.

"To be linked with a club like Celtic is obviously something that I think every young footballer is excited by. I think it's one of the most passionate fan bases in the world, if not the most passionate. It's a club that even people who don't follow football now who is."

"Right now the focus is solely on the national team … Personal things, club things, that will all get kind of figured out once (the) January (transfer window) hits. We've got still a lot more business to take care of here in Qatar."

This report by The Canadian Press was first published Nov. 25, 2022.