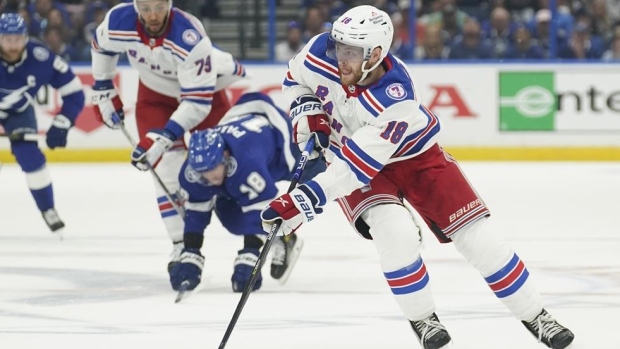 Detroit Red Wings centre Andrew Copp will be back for the first week of the regular season after undergoing abdominal surgery, the NHL team said on Wednesday.

The Ann Arbor, Mich., native tallied 21 goals and 32 assists in 72 games split between the Winnipeg Jets and New York Rangers last season. Copp was acquired by the Rangers in March in exchange for prospect Morgan Barron and three draft picks.

The Red Wings also announced that defenceman Jake Walman is expected to make his return from injury in mid-November. Forward Robby Fabbri and blueliner Mark Pysyk are slated to return after the new year.

Fabbri, 26, has not played since suffering a lower-body injury against the Minnesota Wild on March 10. The Mississauga, Ont., native has registered 73 goals and 79 assists in 302 career regular-season games.

Pysyk, the former No. 23 overall pick in the 2010 draft, spent last season with the Buffalo Sabres and signed a one-year deal with Detroit in July. He tallied three goals and nine assists for 12 points in 68 games last season.

Additionally, centre Chase Pearson remains out indefinitely due to personal reasons. The 23-year-old appeared in three NHL games a season ago.

The Red Wings open their pre-season schedule against the Pittsburgh Penguins on Sept. 27 and will host the Montreal Canadiens in their season opener on Oct. 14.