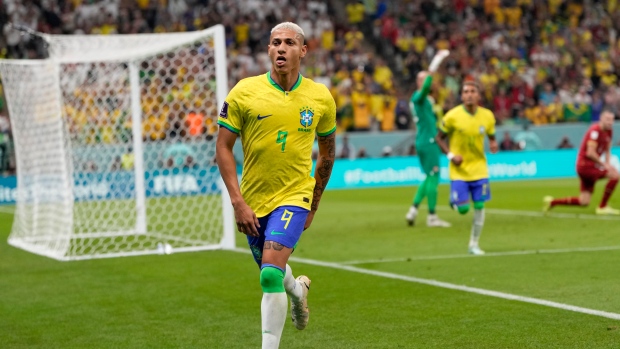 The 2022 FIFA World Cup continues Monday as Brazil takes on Switzerland in a Group G match.

You can watch every game of the 2022 FIFA World Cup, LIVE on TSN, TSN.ca, and the TSN App.

Switzerland blanked Cameroon 1-0 in the tournament opener for both teams. However, Cameroon applied pressure in the match by landing five shots on goal compared to three for the Swiss. Possession time was also even at 50 per cent.

Brazil topped Serbia 2-0 last Thursday on the strength of two goals from Richarlison. Brazil attempted 23 shots, putting nine on target, while Serbia was unable to land any of its five attempts. Brazil controlled the match with possession at 60 per cent.

Brazil’s Neymar has been ruled out for the remainder of the group stage after suffering an ankle injury against Serbia.

How to watch 2022 FIFA World Cup: Brazil vs. Switzerland

You can watch Brazil vs. Switzerland, along with every game at the 2022 FIFA World Cup, LIVE on TSN, TSN.ca and the TSN App.

Where to watch: TSN, TSN.ca, and the TSN App.

Odds for Brazil vs. Switzerland