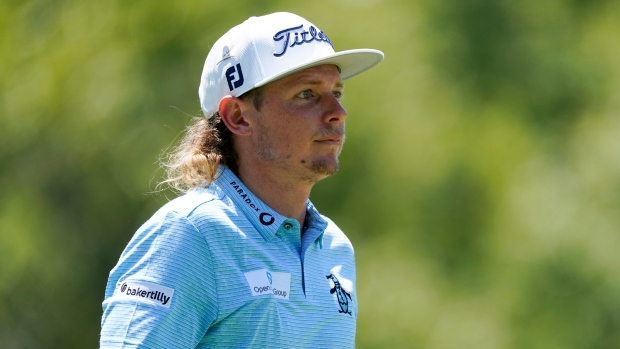 BRISBANE, Australia (AP) — British Open champion Cameron Smith had a topsy-turvy round of 2-under 69 on Saturday to take a three-stroke lead into the final round of the Australian PGA championship.

Smith had six birdies and four bogeys -- including two in a row on 11 and 12 that saw his lead reduced to just one -- before another bogey on the 18th to finish with a 54-hole total of 11-under 202 at Royal Queensland.

Liu Yanwei (70) of China and Masahiro Kawamura (71) of Japan were tied for second. Four others, including Australians Min Woo Lee (68) and second-round leader Jason Scrivener (74) were at 7-under and four behind Smith.

Smith led by three strokes after nine holes Saturday after starting the day one shot behind Scrivener. But Smith had a two-shot lead an hour later thanks to a two-shot swing on the fourth hole.

Smith had birdied the second and then put his approach to the par-3 fourth within a meter of the flag, while Scrivener was unable to get up and down from the bunker.

The two-time former Australian PGA winner then birdied the sixth and seventh holes to build a four-shot lead before making bogey on the ninth when he sliced his drive. Smith recovered to the fairway, put his third shot into a deep greenside bunker and then missed his putt for par.

Scrivener dropped three shots on the front nine as his pursuit of a first title since 2017 stalled.