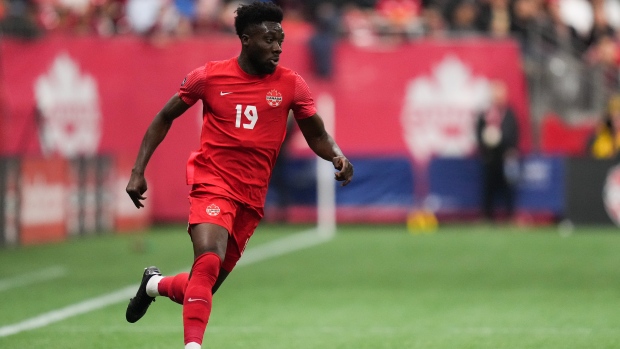 Canada Soccer has reached an agreement over licensing rights with Alphonso Davies that will see the star player receive a royalty for sales of his national team jersey, Davies’ agent, Nick Huoseh, told TSN.

Huoseh declined to disclose terms of the agreement. He said the deal does not impact Davies’ insistence that no company other than ones he has personal deals with has permission to use his image in any advertising.

“Details of items that are part of ongoing negotiations with our national teams will be done privately, as we’ve done for the past few months,” Senra wrote in a message to TSN.

Davies becomes the only member of either the men’s or women’s national teams to have a jersey licensing agreement.

The Canadian Men’s National Soccer Team Players Association, which was recently formed to negotiate a contract with Canada Soccer, has hired a sports marketing firm to explore licensing opportunities and is in negotiations with Canada Soccer to try to reach a deal on behalf of players other than Davies.

As TSN reported on Friday, the association has also told the federation not to use images of individual players in ads without first negotiating permission. Canada Soccer has responded that sponsors can use group images of players in ads because of historical precedence.

While the details of Davies’ jersey deal have not been announced, a person familiar with the matter told TSN that the association has trying to reach an agreement with Canada Soccer that would be modelled after the agreement the United States Soccer Federation reached earlier this year with its men’s and women’s national teams. Under that deal, players receive a licensing royalty of about $10 (U.S.) for every one of their personalized national team jerseys sold, the source said.

The source also said that Davies’ deal was likely a positive harbinger for players on both the men’s and women’s Canadian national teams.

“The federation today is all about equality and equity,” the source said. “Christine Sinclair has carried this program for more than a decade and not made a cent off of jersey sales. Both national teams have overperformed and Canada Soccer really has no choice but to offer the same deal Alphonso got to all other national team players, so that’s good news for everyone. The bad news is that the rollout of national team kit has been so horrible. They might get royalties sorted, but what happens if they only sell a few hundred kits because you can’t find them in any stores?”