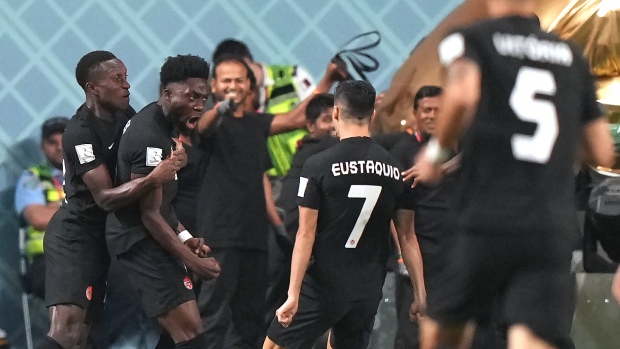 Despite being eliminated from the knockout stage of the 2022 World Cup in Qatar, Canadian players know they still have a chance at history before exiting the tournament.

The Canadian squad opened its first World Cup in 36 years with back-to-back losses to Belgium and Croatia, leaving the team on the outside looking in on the Round of 16.

Even though the result wasn’t what they wanted, Canada showed the world that they belong after a 22-shot performance against No. 2 ranked Belgium, which led to international praise.

They followed that performance up by making Canadian men’s World Cup history when Alphonso Davies scored the country’s first-ever goal at the tournament against Croatia on Sunday.

In Canada’s curtain-call game against Morocco on Thursday, the team is still looking for one more first: a result.

“We still need everyone behind us and we’re still trying to make history,” Canada defender Alistair Johnston told the media on Monday. “We scored a goal, which was a really special moment. So now we’re looking for that first result and that Morocco game is going to be a great chance.”

Johnston believes that the experiences of getting those firsts on the world stage will only help the development of the Canadian program going into future international competitions.

“We have a really good young group, and It does make a difference getting that first goal. It changes something mentally,” said Johnston. “To be able to get that first win, first draw, first result. Just to be able to say you’ve done that and been a part of that helps alleviate some of those mental barriers.”

The loss against Croatia on Sunday was a disappointment for Canada. The game began with elation when Davies scored in the second minute to make Canadian men’s World Cup history and give Canada the lead.

But Croatia remained poised and was able recover from that early mistake to tie and then take the lead in the first half, leaving Canada chasing the rest of the match. The loss showed Canada the difference between their talented young group and an experienced, battle-tested team.

“There’s definitely gaps for us to close, and this experience will only help us going into [the] Morocco [game] and further back in CONCACAF,” said Johnston. “[Croatia] never looked uncomfortable, they never looked phased, and they realized their time will come in that game.

“Once they kind of got a grip of the game, we found it very difficult. There’s a reason why they took that team to the 2018 World Cup final.”

An aspect of Canada’s success for this World Cup cycle has been the growth of attention it has received at home. After 36 years, Canadians finally got to hear its anthem played on the biggest stage and see where they stand against the rest of the world.

A result against Morocco on Thursday would only help solidify the belief Canada’s men’s team belongs on this stage and is here to stay.

“We’ve brought a lot of new fans on board over these past couple of weeks and months who may have underestimated how difficult the World Cup is,” said Johnston. “Deep down we all wanted to get nine points from the group and potentially lift the World Cup at the end. But for a team who is only in their second World Cup, that was always going to be a long shot.

“[A win against Morocco] puts the [public] trust in us going into 2026 and in future competitions like the Gold Cup or Nations League. That feeling of belongingness, we’ve been wanting that for a long time, so a result against Morocco would go a long way in solidifying that.”