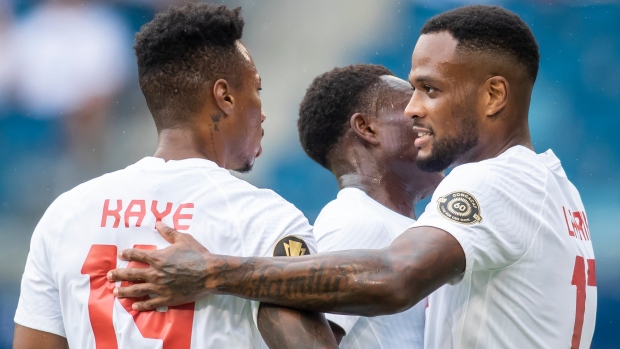 Players on the Canadian men’s national soccer team have agreed to form a players’ association to collectively bargain with Canada Soccer, Toronto FC midfielder Mark-Anthony Kaye said in an interview.

Kaye, who has 35 caps for Canada, said that 47 of 50 players involved in the effort to organize have signed union cards and that the players are receiving legal advice from Toronto-based law firm Aird & Berlis LLP and Williams & Connolly LLP, a law firm in Washington that has advised players on the U.S. national men’s soccer team.

Every player who has been called to a national team training camp since Jan. 1, 2021, was given a union card, Kaye said on Friday.

“Before we got to this point with the national team in terms of success on the field, we never felt there was a need to address the business side of it and what the players would get from FIFA,” Kaye said.

“We have questions that need to be answered about World Cup money and about other issues as well. What are training camps going to look like? What are flights for players moving forward going to be like? As soon as we got to the World Cup, we felt like we needed to really set a tone on where we leave this program when all our time is done. We don’t want to leave that to chance. We needed to come together to form a union.”

The new players’ group will be called the Canadian Men's National Soccer Team Players Association (CMNSTPA), Kaye said, adding that legal documents to create the association were signed on Thursday.

The men’s team players have been battling for months with Canada Soccer over how much money they will be paid for qualifying for this year’s World Cup. Kaye said the team has not yet approached Canada Soccer officials about their negotiating plans.

“We welcome this development and we look forward to reviewing their documents,” Canada Soccer spokesman Paulo Senra wrote in a statement. “We continue to be committed to open and transparent conversations with both our national teams with the aim of finding a resolution based on the values of fairness and equal pay. We look forward to continuing our negotiations.”

Several people familiar with the matter said they expect Canada Soccer to voluntarily recognize the players’ association, as the federation did in 2016 when the national women’s team players organized.

Even if Canada Soccer tried to contest the formation of a union to a provincial labour relations board, the application would likely be approved based on how many players have signed union cards, said Rahul Soni, a labour and employment lawyer in Toronto who has represented both unions and employers.

“The benefits to an employee, a player in this case, is having a union levels the playing field and when you have a collective labour agreement, it really sets rules about what the employer is allowed to do and sets out what happens if the employer does something inappropriate,” Soni said. “It tries to eliminate any hanky-panky from an employer.”

Canada Soccer is poised to receive a $10 million (U.S.) payment from FIFA after the men’s national team qualified for this year’s World Cup in Qatar. While the men have asked for 40 per cent of the bonus after tax, Canada Soccer says the request is untenable because the federation has pledged to pay the men’s and women’s teams equally.

Canada Soccer has offered to give the players 30 per cent of the World Cup bonus, less than some other countries. The federation's offer would amount to about 15 per cent of the bonus after tax, Kaye said.

“How is the U.S. agreeing to give their players 90 per cent of newfound prize money and Canada Soccer is offering to give us like 30 per cent?” Kaye said. “That’s so little. It just doesn't make sense. They're trying to hold a lot of the money they're getting from FIFA for themselves.”

Kaye said that in its latest contract offer on June 23, Canada Soccer has proposed that players on both men’s and women’s teams who fly via commercial airlines to a national team game or training will fly in business class if they meet two or more of the following criteria; The player's scheduled arrival time is less than 48 hours before the start of the match for which the player is traveling; travel either begins or ends outside of the U.S. or Canada; travel will result in a time change of more than three hours. Players flying via commercial who are not entitled to fly in business class are entitled to fly premium economy.

“We agree that the federation has to do better for the women’s team players,” Kaye said. “The federation should definitely bring them up to where we are. No one should be going backwards.”