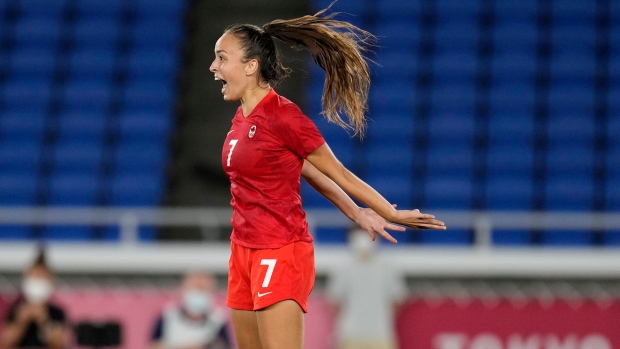 In the past few months, Canadian midfielder Julia Grosso has laced up her cleats in Canada, Mexico, Italy, and most recently, a week-long stint in Australia.

While she feels blessed to be in her position to travel for the sport she loves, the jetlag is undeniable.

“I'll wake up at like four in the morning here in Italy. I feel like every week or so I'm somewhere new,” she said.

Grosso is back in Italy for her second season with Juventus. She joined the club midway through last season after finishing her collegiate career with the University of Texas, and helped her new team to three trophies, including the Serie A title.

Last May, she signed an extension with Juventus to keep her with the club until the end of 2024.

The Vancouver native, who recently celebrated her 22nd birthday, feels like she has gained a lot of confidence since making her professional debut in January.

“When I first came in, I was obviously a lot more nervous,” she told TSN. “I just came out of college, so it's definitely a different environment… I feel a lot more meshed in with the team. I've gotten really close with some of the people.”

Grosso will be on the road (or in the air) once again this week, as Juventus heads to Denmark to face HB Køge, the defending Danish champions, in UEFA Women’s Champions League.

The teams will meet on Tuesday for the first leg of round two of the qualifying stage, with the second leg being hosted by Juventus on Sept. 28. The winner of the tie advances to the group stage.

Grosso got her first taste of Champions League action in March, when Juventus faced Olympique Lyonnais in the quarter-finals of last year’s competition. Grosso started in the first leg, recording 66 minutes, but didn’t feature in the second leg. Lyon would win 4-3 on aggregate en route to claiming the Champions League title, their sixth in the past seven seasons.

Despite the disappointing result, Grosso views it as a positive experience.

Grosso also featured in Juventus’ two Champions League matches last month. She played the full 90 minute in her team’s 4-0 win over Luxembourg club Racing-Union and came off the bench in a 3-1 win over Israeli’s F.C. Kiryat Gat.

“The fact that we're now a part of that, I know how big of a deal that is,” she said. “Champions League is like the biggest thing in football. So, it's really exciting to be a part of.”

As she looks forward to the season ahead, Grosso is also reflecting on the standout summer she had with Canada’s women’s team.

She helped the Canadians to a second-place finish at the CONCACAF W Championship in Mexico. She netted three goals in the first two games, including the lone goal in a 1-0 win over Panama that earned Canada a berth at next year’s FIFA Women’s World Cup.

She took home the Golden Boot as the tournament’s top scorer with three goals in four matches, which also happened to be the first three goals of her international career.

While Grosso said the award meant a lot, especially as a midfielder, she also brings the focus back to the team.

“I think it's really nice to see because I know that tournament, a lot of midfielders on our national team scored goals. And that's exciting to know that other positions are now stepping up and scoring goals as well, because obviously, it's usually the frontline,” she said.

Last summer, Grosso scored the winning penalty to secure a gold medal for Canada at the Tokyo Games, and her stock with the national team has been on a constant rise since.

“Forward-thinking, creative player who can score goals,” head coach Bev Priestman said of Grosso during the CONCACAF W Championship. “Julia is a fantastic player. At time she needs to know that herself. But she’s got a great future.”

Grosso has steadily seen an increase in minutes under Priestman. While she is still working to cement herself as a starter (15 of her 43 appearances with the national team have been starts), she has featured in all but one of Canada’s 13 games this year.

In the Canadians’ most recent matches, a pair of friendlies against Australia (one of the hosts for next year’s World Cup, along with New Zealand), Grosso played a slightly different role.

With Priestman dealing with a shorthanded roster due to injuries and other limitations, Grosso played alongside Jessie Fleming as a double pivot, with the two working as holding midfielders. Christine Sinclair shifted back into the No. 10 role, Fleming’s usual spot.

Grosso said while it was different experience for her, she enjoyed working closely with Fleming.

“I think we really know how each other plays,” she said. “I know where she wants the ball. She knows where I want it. I feel like we don't have to tell each other what to do. We just kind of flow nicely.”

Grosso’s adaptability in midfield is just one of the reasons she’s a safe bet to be on the roster for next year’s World Cup. As an 18-year-old, she was part of the team that lost in the round of 16 at the 2019 World Cup, but she didn’t see any minutes under then-head coach Kenneth Heiner-Møller.

“Going to a World Cup I think is literally every single girl’s dream. So, it's really cool that I could be a part of that,” she said.

As for the upcoming men’s World Cup, Grosso’s loyalties may be divided. She is half-Portuguese and a diehard Ronaldo fan.

“I'm cheering for Canada all the way. But I'm also cheering for Portugal too. We’ll see who wins,” she smiled.

And if the two countries were to meet in the knockout stage?

“I would cheer for Canada.”