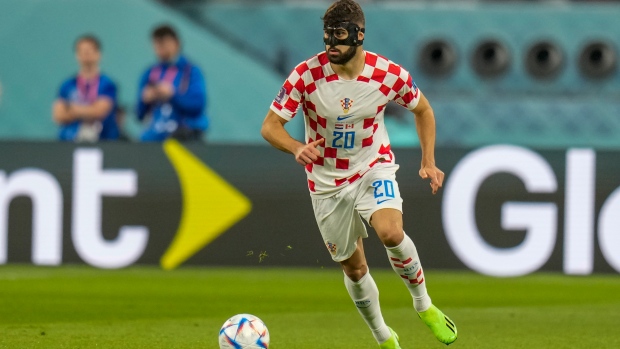 DOHA, Qatar (AP) — For 90 minutes, the hulking, masked mass that is Joško Gvardiol kept Belgium’s big-name strikers at bay with timely tackles — none bigger than his stop on Romelu Lukaku two minutes into stoppage time.

Then the 20-year-old Croat who is fast becoming the most sought-after center back in Europe went over to the side of the field and reached up to embrace his mother and cry.

The fact that Croatia conceded only one goal in its three group games at the World Cup is largely down to the performance of Gvardiol, who, despite his hefty stature, is nicknamed “Little Pep” because of the similarities of his last name with that of Manchester City manager Pep Guardiola.

“He’s the best defender in the world,” Croatia coach Zlatko Dalić said through a translator after Thursday's game. “Even if he’s not currently No. 1, he will become No. 1.”

While he only recently extended his contract with Leipzig through 2027, Gvardiol is reportedly a big transfer target for Chelsea, which should have no problem paying a 50 million euro ($50 million) release clause inserted into his deal with the German club.

In the meantime, veteran Croatia defenders Dejan Lovren and Domagoj Vida, who are both 33, have taken Gvardiol under their wing. His addition to a team that in 2018 reached the World Cup final has added another dimension in terms of physicality and youth.

“He enjoys great support from Lovren both on and off the field, and Vida also helps with extra advice,” Dalić said. “I am happy to watch how good they work together.”

Gvardiol is wearing a face mask during the tournament because he broke his nose when he collided with Willi Orbán during a Bundesliga match on Nov. 10 — the day after he was named to Croatia’s World Cup squad.

Up next for Gvardiol and Croatia is a match in the round of 16 on Monday against a Japan squad that is coming off an inspiring victory over Spain and managed to advance ahead of four-time champion Germany, which was eliminated in one of the most competitive groups.

“Before the end of the group stage, if we could choose the opponent in the next round, maybe some would say Japan,” Dalić said Friday. “But after seeing that they beat both Germany and Spain, they are anything but an easy opponent.”

At the age of 37 with 158 international appearances, Modrić is still able to dominate soccer’s biggest games with both Real Madrid and Croatia.

Perišić, who is also 33, never seems to tire on the left wing. He ran 72.5 kilometers during Croatia’s seven matches in the 2018 World Cup and could break that mark in Qatar.

While coach Roberto Martinez announced he was leaving Belgium’s squad after its “Golden Generation” was eliminated following a 0-0 draw with Croatia, Dalić said he isn’t through with his national team — no matter how Croatia finishes this tournament.

“This team is a mix of youth and experience,” he said. “I have more plans for Euro 2024 and only then might I reflect on taking some other steps and moves in my career.”