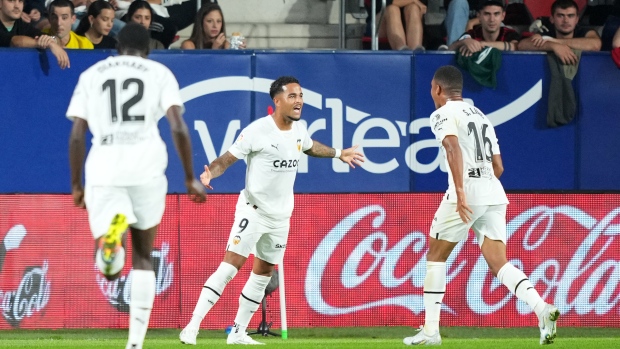 BARCELONA, Spain (AP) — Justin Kluivert scored his first goal for Valencia to help Gennaro Gattuso’s side win 2-1 against an Osasuna side that finished the testy Spanish league match with nine men on Friday.

Kluivert, a forward, was making his first start in his fourth appearance since joining Valencia from Roma on loan. He made a nice run behind the defense, took a through ball from Edinson Cavani, and chipped the goalkeeper to score in the 28th minute.

Kluivert is the son of former Netherlands striker Patrick Kluivert, who scored two goals in his brief stint with Valencia in 2005-06.

When told that his father scored for Valencia 16 years before, Kluivert replied “Madre mía! That's a long time!

“These three points are extra important for us because they come against a good team like Osasuna,” Kluivert said after his team’s first win on the road since Gattuso took over this summer.

Defender Mouctar Diakhaby scrambled in a second goal for the visitors after Osasuna failed to clear a ball from a corner kick in the 54th.

American midfielder Yunus Musah played the last 29 minutes for Valencia, his first match since Sept. 10 after recovering from a groin injury,

Osasuna played the final 20 minutes a man down after Unai García saw a direct red card for taking down Samuel Lino with only the goalie to beat. Edinson, who has yet to score since joining Valencia, hit the crossbar with the resulting penalty.

Osasuna also lost Ruben Peña when he received a direct red for kicking a prone Duro with play stopped with just seconds left on the clock.

Diakhaby also received a second yellow card, apparently for using inappropriate language toward the referee, while he was on the bench after being substituted. Gattuso kicked a cooler while glaring at his defender, who will be suspended for next round’s game against Elche.

“We have to remain calm, and a player on the bench has to respect the decisions of the referee,” Gattuso said about his defender.

Valencia rose into fifth place while Osasuna slipped into eighth.