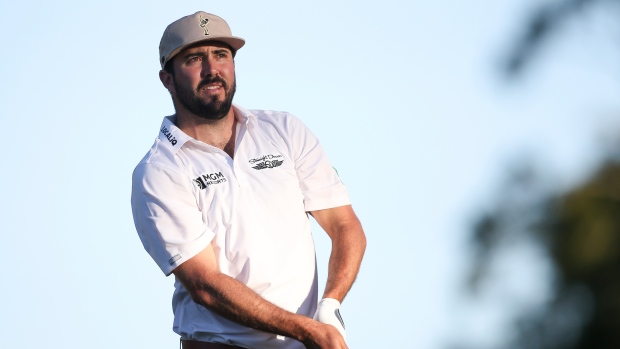 JACKSON, Miss. (AP) — Mark Hubbard ran off five straight birdies on the back nine and ended with a superb shot to 4 feet, giving him a 7-under 65 and a one-shot lead Saturday in the Sanderson Farms Championship as he goes for his first PGA Tour victory.

Hubbard has gone 163 starts over six years without winning, and this would be as good a chance as any. It's his first time to hold a 54-hole lead on tour.

Mackenzie Hughes of Dundas, Ont., showed how much can change in so little time at the Country Club of Jackson.

Hughes sent his approach long on the 18th and faced a difficult putt up closely mown grass to a green and raced away from him. Right went it looked as though Hubbard might have a three-shot lead, Hughes holed the putt from 30 feet for birdie and a 68.

Scott Stallings also in the mix when he chipped out of the bushes to 10 feet on the reachable par-4 15th to reach 14 under. But then after going 51 straight holes without a bogey, Stallings missed the fairways to the left on the 16th and 18th holes and made bogey on both of them.

He shot 68 and was three shots behind along with Honda Classic winner Sepp Straka (69) and Garrick Higgo (68), who bounced back nicely from a double bogey on the 12th hole when he had wedge in his hand from 119 yards in the fairway.

Thomas Detry of Belgium, who started the third round tied with Hughes, had only one birdie on a day of good scoring, shot 74 and fell seven shots behind.

Former PGA champion Keegan Bradley set the tone early with a 64 that left him four behind at the end of the day. On this course, it's important to take advantage of a stretch on the back nine with a pair of par 5s and a reachable par 4.

That's what the 33-year-old Hubbard did as well as anyone.

“I did a good job taking advantage of the gettable holes,” he said.

His streak of five birdies began on the par-5 11th with a pitch to tap-in range. He made a pair of 8-foot birdies on the next two holes, two-putted from 50 feet on the par-5 14th and then chipped nicely behind the green on the short 16th for a 4-foot birdie.

His day ended with a beautiful mid-iron that covered the flag and settled just to the right.

“It didn’t feel as exciting as I’m sure the scorecard looks because I was in the right spot every time,” Hubbard said.

Hughes also did well through the scoring stretch and nearly pulled off a birdie from the bushes, just like Stallings did, on the 15th. He dropped back with a tee shot that left him no room between the trees to reach the green. But the finish was ideal.

“It was big,” the Canadian said. “I thought when I put myself back there it was going to be a tough two-putt. To see that ball go in was a big bonus. It puts me one back tomorrow, and I wanted to be as close to Mark as I can.”

Hubbard's best career finish is a runner-up finish in Houston in 2020. He didn't have great expectations this week, mainly because of a minor injury. Seems his daughter accidentally knocked a knife off the table and onto his foot last week.

“So I had a hole in my foot this whole week, and I didn’t get to practice at all last week, so I was just kind of coming here trying to get ready for Vegas, to be honest,” he said. "I think that probably has a lot to do with expectations being low.

“That being said, I felt incredible about my game for the last six, seven months, so I’m just kind of trying to go with it and keep those expectations low and just try and hit good golf shots.”