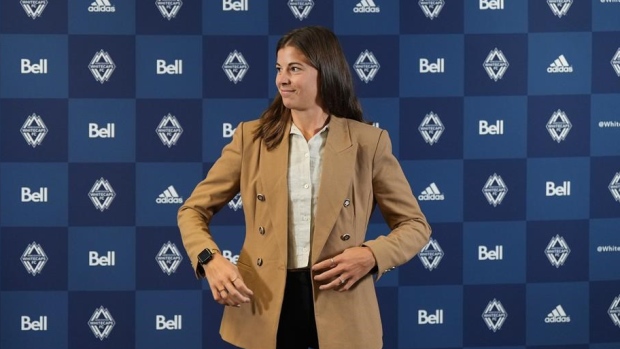 A women’s professional soccer league is coming to Canada.

Former Canadian international Diana Matheson, along with her business partner, Thomas Gilbert, announced on Monday night the launch of Project 8 and the creation of a Canadian women’s domestic league, which is set to kick off its inaugural season in 2025.

CIBC and Air Canada are on board as founding partners. The Vancouver Whitecaps FC and Calgary Foothills are confirmed to be the first two clubs in a planned eight-team league. The remaining six teams are expected to be confirmed in 2023.

“It's been a journey,” Matheson told TSN. “We've been working pretty hard behind the scenes here for a while and now we're at the point where we want to get the wider message out that we've been working on this.”

Matheson, who earned 206 caps for Canada and won an Olympic bronze medal in 2012, retired in July 2021 and has been working on the development of a women’s league since she stopped playing. She met Gilbert at Queen University’s Smith School of Business, where she is working towards an executive MBA.

While she says it’s been a long road, the response she has received so far has been overwhelmingly positive.

“CIBC and Air Canada were so enthusiastic to speak with us and work with us that I don't think that has been a major hurdle, to be honest,” she said, adding that Project 8 is looking for eight total partners. “We're pretty positive about getting the next few in the door. There are incredible Canadian companies leading the way on this.”

Christine Sinclair and retired Olympic gold medallist Stephanie Labbé will also be involved in the development of the league. In October, Labbé was named as the Whitecaps’ general manager of women’s soccer, while Sinclair is currently working as an advisor and ambassador.

“We believe it is important that women build this league, and we are committed to developing something that is built differently, for women by women,” Sinclair said in a statement. “We want to change the soccer landscape in Canada so women’s players can develop and play professionally here at home instead of having to go abroad, as every one of our national team players must do now to be successful.”

The league will be composed of four teams in the west and four teams in the east for two separate conferences. Beyond Vancouver and Calgary, Matheson said they’re looking at roughly 13 different markets across Canada, adding that they’re specifically aiming at having a team in central Canada, Quebec, and at least one team in Ontario.

The target year of 2025 was a strategic choice to give the league and teams enough runway to prepare.

“It's far enough away to give us time to build the plan, find the teams and give the teams at least 16 to 18 months lead-up to launch their team operations,” Matheson said. “We've only got one shot to build our first women's professional soccer league, so we have to do really well.”

There has long been a push for Canada to have its own women’s professional league, especially since the national team won Olympic gold in 2021. Those in the Canadian soccer circle have debated the merits of having a start-up league or looking at an expansion club in the National Women’s Soccer League (NWSL), which is based in the U.S.

For Matheson, the goal always remained for Canadian players to have their own league.

“I considered every option that was available in the Canadian landscape. I took several calls from the NWSL to see if that was an option, but there's just such a clear opportunity here in Canada,” she said.

“I feel like I've been learning through this project that timing is everything. And the time is now. There's this blank slate to build a women's professional soccer league on and have it led by women that I just kept coming back to.”

Matheson said right now the league is looking at having a maximum of seven international players per team, meaning that all the other slots are allotted to Canadian-born players. She believes this league is essential to Canadian soccer being able to keep up on the international stage.

While women’s soccer used to largely be driven by national teams and the strength of those programs, women’s professional soccer has quickly risen up through the ranks.

“Global soccer is run by domestic leagues,” Matheson said. “The reality is the power and the investment has already shifted to the professional game. We've missed the window, almost, in some ways. And if we don't build a league of our own, then we're going to be left behind in women's soccer. There's no way that 60 high performance athletes we support through national team pathways are going to be enough to compete with the rest of the world in the long term.”

Matheson added that the new league will mark a shift in the Canadian soccer landscape. Right now, Canada’s national team players are spread out among the NWSL and several leagues in Europe, such as England’s Women’s Super League and France’s Division 1 Féminine

“I think it reshapes everything. Period,” Matheson said. “We're going to have a bulk of Canadian players playing here, in Canada. It's going to be a lot easier for national games to run camp, etc. It's going to widen the player pool probably by four or five times.”

According to Matheson, the league plans on having a designated player salary to ensure that at least one player from Canada’s national team is on the roster of each team.

She also believes that the new league can compete with the NWSL on player salary. For the 2022 season, the NWSL’s minimum player salary was $35,000.

There are still many more details to be finalized over the next while, including a league name, which Matheson said will be inclusive and not gender-specific. In terms of a leadership group, the plan is to have a two-tiered board structure with a commissioner in place. She also hopes that the league will become a Canada Soccer member by 2023, with full sanctioning in 2024.

While there is no broadcast deal currently in place, Matheson did stress that visibility is key for not just women’s soccer, but women’s sports.

Even with several unknowns on the horizon, Matheson is optimistic about the league’s future.

“I think it's just genuinely a good news story. We're going to build women's professional sport in Canada,” she said. “I think it's the strength of this project that we get to build from scratch. We get to learn from a lot of the lessons that sport and women's sport has made to hopefully make this as strong a foundation as we can for sport in Canada.”