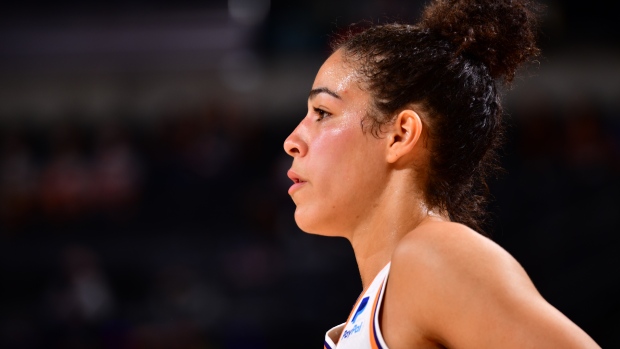 Kia Nurse and Karina LeBlanc are among a star-studded group of Canadian women tasked with helping determine the course for professional women's sport in Canada.

Canadian Women and Sport announced a couple of new initiatives on Tuesday, including the appointment of the Commercial Women Sport Advisory Group, and a study on the potential and direction of professional women's sport.

Nurse and LeBlanc are both two-time Olympians. Nurse now plays for the WNBA's Phoenix Mercury, while LeBlanc is the head of women's football for CONCACAF and the GM of Portland Thorns FC.

They're joined by Stacey Allaster, U.S. Open Tournament director and former CEO of Women's Tennis Association; Toronto Raptors VP of basketball operations Teresa Resch, among others on the group which also includes women in media and corporate brands.

Cheri Bradish, the director of Toronto Metropolitan University's Future of Sport Lab, will be the lead author on a report to be released in the fall.

"This is an exciting era for women's sport in Canada," said Allison Sandmeyer-Graves, the CEO of Canadian Women and Sport. "There's a desire to have the growth of professional women's sport in this country. There have been the CWHL (Canadian Women's Hockey League) and other efforts made, but we really think that there's tremendous opportunity now given the number of leagues and groups, as well as the athletes being so vocal about it, who are looking to establish professional support leagues in Canada in the coming months to years."

The advisory group will guide a national landscape report that will gather data both from a questionnaire, along with secondary data from case studies and work with national sports organizations.

"We are interested in looking at this broadly, but absolutely it’s doing primary research to find out what do Canadians think," said Sanmeyer-Graves. "What are their habits? What are their behaviours around women's sports, and what could those be around women’s professional sports?

"And looking at it from the perspective of media, of brands — merchandise and things like that — as well as teams and leagues themselves. Because those are the folks who are really going to make the difference in terms of bringing these opportunities to Canada, and we want to support them with some great insight and data to help them make decisions that are going to set women up for success."

Sandmeyer-Graves said it was crucial the advisory group provide Canada-specific insight, rather than rely on information from pro leagues in the U.S.

"The United States is a very different market," she said. "We want Canadian-specific insights and we believe that this panel and this report represent the best foot to start out on."

This report by The Canadian Press was first published Aug. 9, 2022.