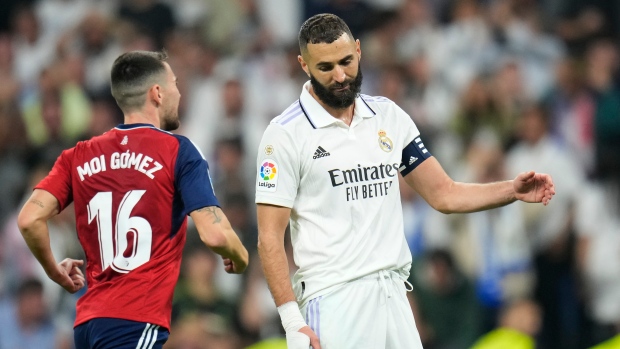 MADRID (AP) — It was not the return to action that Karim Benzema had hoped for.

Back in Real Madrid's squad after a long injury layoff, the France striker missed a second-half penalty kick that helped to end the team's perfect start to the season.

Madrid’s streak of nine straight victories in all competitions was halted after a 1-1 home draw against 10-man Osasuna in the Spanish league on Sunday.

The result also cost Madrid the league lead, as it was surpassed by Barcelona following its 1-0 win at Mallorca on Saturday. Both teams are tied on 19 points but the Catalan club is ahead on goal difference.

Benzema, who had missed three straight matches because of a right leg injury sustained before the international break, had a chance to give Madrid the lead in the 79th minute, but his shot from the spot was saved by Osasuna goalkeeper Sergio Herrera.

It was the third straight penalty miss by Benzema against the Osasuna goalkeeper. He had two penalties saved by Herrera in April when Madrid won.

And things were clearly not going Benzema's way as shortly after the striker had a goal disallowed for offside.

“We needed Benzema to convert the penalty,” Madrid coach Carlo Ancelotti said. “He usually does. It was an accident that sometimes happens.”

Vinícius Júnior had opened the scoring in the 42nd after finding the far corner with what appeared to be a cross attempt into the area, but the visitors equalized with a header by Kike García in the 50th.

Osasuna went a man down when David García was sent off for the foul on Benzema that prompted the penalty.

It was Osasuna's first draw after four wins and two losses this season, keeping the Pamplona club in sixth place. It got the point at the Santiago Bernabéu Stadium despite playing without the suspended Chimy Ávila, one of its best players.

Ancelotti was without veteran midfielder Luka Modric and goalkeeper Thibaut Courtois because of injuries.

A minute of silence was held before every Spanish league match in honor of victims of the tragedy at a soccer stadium in Indonesia on Saturday night.

A goalkeeper's mistake six minutes into second-half stoppage-time allowed Valencia to pull off a 2-2 draw at Espanyol.

Espanyol goalkeeper Álvaro Fernández thought a high shot by Eray Comert toward the goal was going wide and let the ball go, but it ended in the net for the visitors’ equalizer.

Fernández dropped to the ground in despair and later put his hands together over his head with a plea for forgiveness from home fans.

Espanyol was looking for its first home win of the season. It is winless at its stadium in seven straight matches, going back to last season.

The hosts had taken the lead with Sergi Darder's goal in the 83rd after Gabriel Paulista opened the scoring in the 53rd and Joselu equalized for Valencia in the 56th.

Valencia, which stayed midtable, played with 10 men after Marcos André was sent off in the 85th. Espanyol, sitting near the relegation zone, had Martin Braithwaite red carded early in stoppage time.

Alexander Sorloth scored twice and Takefusa Kubo added one of the other goals for Sociedad, which moved to seventh place.

Taty Castellanos was among the scorers for midtable Girona, which has lost two in a row.

Real Betis couldn’t overcome a first-half red card and lost 1-0 at Celta Vigo for its second league defeat of the season.

Gabri Veiga scored a ninth-minute winner for midtable Celta, which was without coach Eduardo Coudet because of a trip back home to Argentina for personal reasons.

Betis lost Luiz Felipe in the 20th with a straight red card.

Manuel Pellegrini’s team remained near the top of the standings, as it was coming off five wins and a single defeat.