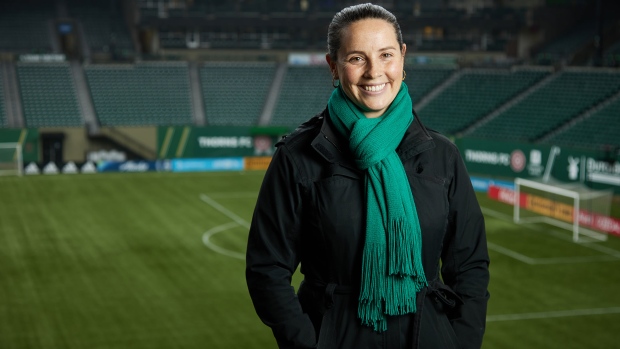 Former Canada international Rhian Wilkinson has resigned as head coach of the Portland Thorns only weeks after leading the team to the NWSL title in her first season in charge of the side.

The move comes after Wilkinson was cleared by a joint NWSL-NWSLPA investigation into her conduct as head coach.

“The Portland Thorns and Coach Wilkinson followed all league processes and policies and fully cooperated with this investigation,” NWSL commissioner Jessica Berman said in a statement on Friday. “The joint investigative team conducted a thorough investigation that resulted in a finding of no violation of League policies.”

Sources tell The Athletic's Meg Linehan that Wilkinson would not be disqualified from working in the league in the future.

Wilkinson says the conduct in question happened in October with a series of text messages with defender Emily Menges, who played with Wilkinson on the Thorns in 2015.

“Feelings were shared by text message and I reciprocated feelings," Wilkinson said. "Straightaway, the player and I — because both of us truly believe in the process and what needs to happen in this league — took steps the next day to do things the right way."

Wilkinson said her decision to resign came from losing the confidence of her players.

“Once you’ve lost the locker room, which I have, there’s no return," Wilkinson said. "So that’s why I recognized my time in Portland couldn’t be salvaged a long time ago, because there were players who just wouldn’t communicate with me. And that part I can live with. When the locker room — whatever reason — is gone, it’s gone.”

Linehan reports that at the conclusion of the investigation, a group of Thorns players sent a letter to Berman, saying that they had met with the Thorns interim CEO Heather Davis about Wilkinson and Menges and felt "unsettled and unsafe” after it.

“As you know, there are several potential power imbalances that are created when a coach fraternizes with a player, not only due to the impact of the relationship on the player’s professional status, but also because of the potential age difference between coach and player, as well as the coach’s status as an authority figure," the letter read. "And, we also know that these power imbalances exist regardless of gender or sexual orientation.”

The players added that they were approached by both Wilkinson and Menges after meeting with Davis and were concerned with potential reprisal.

Wilkinson says that she regrets the way she handled the matter in retrospect.

“It’s been a painful time,” Wilkinson said. “The players have been through so much in two years, and I do feel like this is a huge consequence of the trauma that has been happening and the reaction. These players have had to clean up the league and they feel responsible for it, and I do get that part.”

But one player tells Linehan that they did not believe Wilkinson and Menges intended to self-report.

“They got confronted and then they reported," the player said.

Wilkinson's departure comes a day after Thorns and Portland Timbers owner Merritt Paulson announced his intentions to sell the club. The announcement comes months after two club executives, Gavin Wilkinson (no relation to Rhian Wilkinson) and Mike Golub, were fired following an investigation into systemic misconduct within the league.

Menges, who is on the NWSLPA board, says the letter by teammates did not sit right with her.

“I’m very conscious of the fact that I’ve been involved in conversations in Portland where we’re trying to decide as players what stance we should take on certain things,” Menges told Linehan. “We’re pretty much basing our decisions on investigation reports. So if all of a sudden we’re not believing investigations, then where does that leave us for all the decisions we’ve made in the past about people’s lives and careers?”