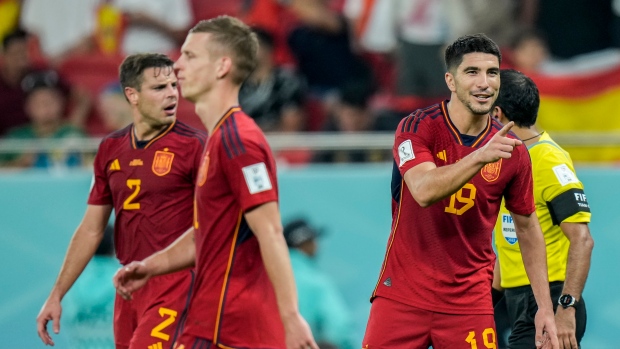 DOHA, Qatar (AP) — After conceding late to miss out on a victory against Germany, Spain finds itself with some work left to do against Japan to guarantee its spot in the round of 16 at the World Cup.

The Spaniards doesn’t need much, though, because a draw on Thursday will be enough, and even a loss may allow the team to advance depending on the other Group E result between Germany and Costa Rica.

Watch Spain take on Japan on Thursday at 2pm et/11am pt on TSN.

Japan doesn’t have it as easy, but a win will guarantee the Japanese a place in the knockout stage for the second straight time. It would be the first time Japan advances past the group stage in back-to-back tournaments. If Japan loses, though, the team will head home.

“It’s going to be a high-pressure game for our players,” Japan coach Hajime Moriyasu said Wednesday. “But we must believe in ourselves. The players must believe in themselves and they must believe in their teammates in order to fight against our opponent. Hopefully they will be able to do their best and the result will come.”

The Japanese opened their campaign with a surprising win over four-time champion Germany before losing to Costa Rica. They were eliminated by Belgium in the last 16 in Russia.

Spain, which conceded an 83rd-minute equalizer against Germany, may also go home with a loss if Costa Rica beats the Germans or if the Germans win big to overcome Spain’s goal difference after its 7-0 opening win over Costa Rica.

A victory at Khalifa International Stadium will guarantee Spain first place in the group, and keep it on track for a possible matchup with five-time champion Brazil in the quarterfinals.

“Hopefully we will get to face Brazil, because that would mean that we finished in first place in our group,” Spain coach Luis Enrique said. “To win a World Cup you need to beat every team, so we are not going to try to avoid anyone.”

Spain enters the final round with four points, one more than both Japan and Costa Rica. Germany has one point.

“We are not thinking about our opponents in the knockout rounds,” Spain midfielder Koke Resurrección said. “We need to beat Japan first and then we’ll see which team we’ll have to play against. If it’s Brazil in the quarterfinals, so be it, and we’ll try to prepare for it as best as possible.”

Germany’s chances of staying alive in Qatar will largely depend on Spain winning its match against Japan. Then a victory over Costa Rica would be enough for the Germans.

What may not help Germany is the fact that Luis Enrique may rotate some of his players after making only one change from the first to the second game — Dani Carvajal coming in for César Azpilicueta at right back.

Teenager Gavi, who started in the first two matches, trained separately from the group after the 1-1 draw with Germany because of a minor knee injury. He was expected to be available for Thursday’s match but was not likely to start.

Another midfielder expected to be rested is 34-year-old Sergio Busquets, the only remaining player from Spain’s World Cup-winning squad in 2010. Striker Álvaro Morata, who scored a goal in each of the first two matches after coming off the bench, could get a spot in the starting lineup against Japan.

The under-23 squads of Spain and Japan met in the semifinals of last year's Tokyo Olympics, when Spain advanced before eventually losing to Brazil in the final. Several players from those squads made their senior teams in Qatar, including Marco Asensio, who scored Spain’s winner in extra time in the semifinals against Japan, and Takefusa Kubo, who plays for Real Sociedad in the Spanish league.