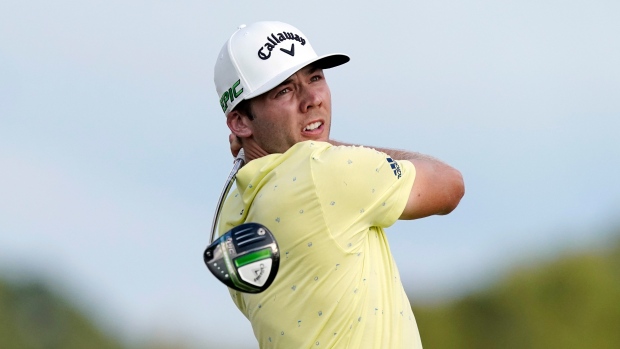 Team RBC has some new members for the 2022-23 season, with a trio of young golf stars set to wear the financial institution’s shield on their sleeves.

Sam Burns, Cam Young and Sahith Theegala, all under 27, were announced as the newest members of the group of American and Canadian players.

“I think we view Cam, Sam and Sahith as just the next generation of professional golf stars,” said Mary DePaoli, RBC’s executive vice-president and chief marketing officer. “They have youth, they have an early and strong track record, and we've just been very impressed by their performance this season.”

Burns, 26, won three times on the PGA Tour, twice with playoff victories, while ending up inside the top 10 in eight tournaments. He tied for fourth at the RBC Canadian Open, posting a pair of 65s over the weekend rounds. He was also a member of the victorious U.S. team in the Presidents Cup and is 13th in the Official World Golf Ranking.

Young, 25, enjoyed a strong first season on the PGA Tour in 2021-22, being named rookie of the year. He had five runner-up finishes, including at the Open Championship, as well ending up third at the PGA Championship and the RBC Heritage.

Theegala, 24, had the busiest schedule, making 32 starts and posting a second, third and five top 10s. He tied for 53rd at the RBC Canadian Open.

“My first experience with RBC was this summer, when we played the Canadian Open,” said Burns. “I think just getting to see how they interacted with clients, how they interacted with their current ambassadors and also the footprint they have in the game of golf, I thought was very impressive. And it was immediately something that I wanted to be a part of.

“And then once we got the week started in Canada, just to see the support from the fans, the local Canadians, how much they enjoyed having a tournament and how much they cared about it was an immediate draw for me and it's something I knew that I want to be a part of.”

Young was equally impressed with RBC’s involvement in golf, which, he noted, went beyond just the two tournaments it sponsors.

“There's so much good that they do and it's all through those events, and to have the opportunity to partner with someone helping you and helping the golf world it’s amazing,” he stated.

Young and Burns also relied on some recommendations from current Team RBC member Webb Simpson, who is close with both golfers. Young played collegiate golf at Wake Forest, as did Simpson and both became close with Simpson this fall at the Presidents Cup where Simpson was a captain’s assistant.

“He was actually somebody I kind of leaned a lot on throughout this process,” admitted Burns. “I talked a little bit about his interactions with RBC and he had nothing but positive things to say. He was very adamant for me to get on board with being an ambassador for RBC and to be able to hear that from him and pump it up a lot, was good. So that was kind of a no brainer for me.”

While Burns was in the thick of things at St. George’s Golf and Country Club at last year’s Open, Young has yet to play the tournament. However, he did compete at the Canadian Amateur in 2017 and ’18, finishing tied for sixth in the latter event held in Duncan Meadows, B.C.

The first year, the tournament was held at the Toronto Golf Club and Young billeted with a local family, which still keeps in touch with him to this day.

“I've had a great experiences going back to Canada. It’s a beautiful country and I'm excited to go play at the RBC Canadian Open this year,” he stated.

The Team RBC campaign officially began in 2010 although the bank sponsored a handful of players prior to that. Over the years, the members of the team have included Ernie Els, Anthony Kim, Jason Day, Luke Donald, and Fred Couples. Canadians Mike Weir, Stephen Ames and Graham DeLaet were also part of the ambassador program.

Dustin Johnson, Graeme McDowell, and Harold Varner were on the team before being dropped last year after moving to LIV Golf.

It’s possible that there could be additions coming. The two names that get mentioned most often are Canadians Adam Svensson, who recently notched his first win on the PGA Tour, and Taylor Pendrith, who played on the International team at the Presidents Cup.

“We're certainly not done with Team RBC,” said DePaoli. “As we've always said, Team RBC is very fluid, and we will continue to look at up-and-coming stars. We certainly have both those names on our radar. But we have been working with Cam, Sam, and Sahith for a while now, and I would say these discussions, they take time. You want to get to know the athlete, you want to get to know the individual, you certainly want to get a lot of feedback on their performance both on and off the course, and so these things aren't rushed decisions that we make, certainly in light of all of the disruption happening in golf right now.”

RBC gets multiple use from the male players, including having them play in both of their sponsored events. Both male and female golfers appear in marketing and advertising campaigns and play alongside the bank’s top customers.

All three of the new Team RBC members will make their 2023 PGA Tour starts at the Sentry Tournament of Champion in Hawaii in early January. It will kick off a new year for the tour which it will see a lot of changes, including the designation of elevated tournaments, where the top golfers will all compete for larger purses. The RBC Heritage is one of those while the RBC Canadian Open is not, something that could change in future years.

“I would say 2023 is going to be a defining year for the PGA Tour,” stated DePaoli, who has held plenty of discussions with both Golf Canada and the PGA Tour about the state of the tour. “And it's one where I think they will certainly be looking at more concrete direction in terms of their plans and some of their efforts to evolve and really lift the game of golf. I think that there will probably still be some changes and I think those changes will be well thought through and fairly mature, so there's probably a lot of a lot of interesting moves still to come and 2023.”

The RBC Heritage is set for April 13-16 in Hilton Head, S.C., while the RBC Canadian Open will be held June 8-11 at Oakdale Golf and Country Club in Toronto.