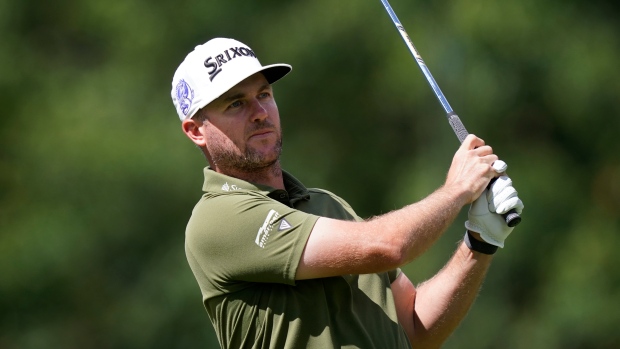 That’s the word Taylor Pendrith used to describe his rookie year on the PGA Tour. It ended on Sunday with a tie for eighth at the BMW Championship that left him in outside the top 30 and without a ticket to the Tour Championship.

But he may have one more event on his schedule. Pendrith confirmed he has texted back and forth with Presidents Cup International Team captain Trevor Immelman. While he wouldn’t reveal the contents of those texts, the fact that the two are communicating likely means Pendrith is under consideration for a captain’s pick.

Immelman will add four players to his team on Sept. 6. Eight already qualified through a points system that was finalized on Aug. 22.

The Canadian is 18th in the International Team standings and would usually be considered a longshot to be added. However, his play since returning from four months off due to injury has been stellar. He’s played six times and finished no worse than 13th in five of those starts.

His prodigious length off the tee – he’s ranked 10th on the PGA Tour in driving distance – could also be an advantage at Quail Hollow, the site of the event, which is regarded as favouring long hitters.

Pendrith would also likely pair well with his long-time friend and college roommate, Corey Conners, who is already on the team.

“I think there’s maybe a chance,” acknowledged Pendrith. “I’ve played very well the last few tournaments. I’m not expecting to make it, but it would be an honour.”

Regardless of whether he plays in the Presidents Cup or not, it’s been a strong first year on the PGA Tour for the native of Richmond Hill, Ont. He posted three top 10s and another six finishes inside the top 25.

He was in contention to win twice, the first time in Bermuda and the next at the Rocket Mortgage Classic in Detroit. While he wasn’t able to close things out, he said the lessons learned will serve him well in the coming years.

Pendrith ended the season in 47th spot on the FedEx Cup standings and collected $2.3 million.

But it was also a season of frustration. While warming up on the range mid-way through the Players Championship, Pendrith felt a pain in his chest that later was determined to be a broken rib. That sent him to the sidelines for four months before he was able to return to play.

“Not exactly how I expected my rookie year to go,” he stated. “Weird would be a good way to sum it up. But it was also a great first year. I gave myself a few chances to win.”

Right now, Pendrith and his wife, Meg, who were married last October, are scheduled to head home to Canada for a week before he begins preparing for the start of the new season. He plans to play events in Napa, Calif., and Jackson, Miss., but that could all change if he gets a call from Immelman.