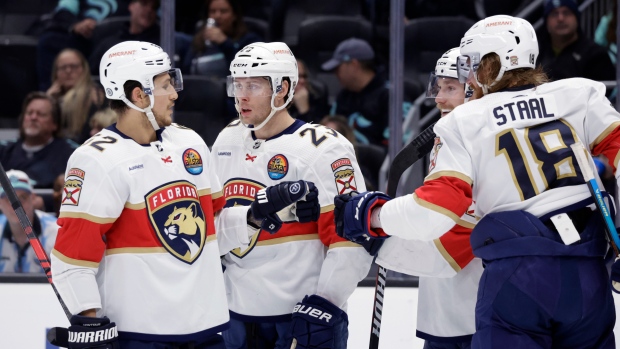 SEATTLE (AP) — Carter Verhaeghe's first-period scoring flurry and a standout performance in goal from Spencer Knight brought the longest active win streak in the NHL to a halt.

Verhaeghe scored twice 26 seconds apart in the first period, Matthew Tkachuk scored his 12th goal and had an assist, and the Florida Panthers snapped Seattle’s seven-game win streak with a 5-1 win over the Kraken on Saturday night.

Seattle couldn’t solve Knight other than Jared McCann’s goal early in the second period. Knight made 36 saves and the Panthers won consecutive games for the first time in nearly a month.

“Just solid, square to the puck. Anything that got away from him he had an answer for,” Florida coach Paul Maurice said of Knight. “One or two really really good saves, cross-seam saves that are hard to make. Gave us a nice bit of confidence and calm back there.”

Florida needed Knight to be at his best because of injuries. Florida had just 10 forwards available for most of the game after Patric Hornqvist was helped off the ice in the first period. Defender Radko Gudas also played just two shifts and had 2:08 of ice time.

Maurice said he didn't know the extent of the injuries but both would need to physicians.

“It’s a tough building to win in and it’s a very good hockey team. A lot of guys stepped up in different ways tonight for a win and that's what you need on the road,” Florida defenseman Marc Staal said.

Verhaeghe got Florida off to a perfect start scoring at 13:00 of the first period after Seattle goalie Philipp Grubauer slid too far across his net and was run into by Staal leaving the goal open. Seattle challenged for goaltender interference but the goal was upheld and Florida went on the power play.

Florida capitalized and Verhaeghe scored his second moments later. Verhaeghe has 14 goals in 25 games and has five games with at least two goals this season.

“It's gives us life on the bench anytime you get the first goal in a game,” Verhaeghe said. “It gives us a huge advantage and we took advantage tonight.”

Aleksi Heponiemi and Gustav Forsling both scored in the third period, and Sam Bennett had three assists for Florida. Three of the Panthers' five goals came on the power play.

Grubauer made 23 saves for Seattle.

Seattle failed to score at least two goals for the first time since being shut out by Minnesota on Nov. 11.

“There weren't very many part of our game that were very good tonight. That's going to be a tough way to win a hockey game,” Seattle coach Dave Hakstol said.

McCann’s goal at 1:53 was his 11th of the season and came on a rebound after Knight stopped Jordan Eberle’s shot from his knees.

But Knight was otherwise excellent. His most important save came in the closing seconds of the first period, denying Seattle rookie Matty Beniers with his skate.

“This was not one or two people that weren’t quite good enough. We were all below the bar tonight,” Hakstol said.

NOTES: Florida dressed just 11 forwards due to Aleksander Barkov missing his fifth straight game due to illness and Anton Lundell out due to an upper body injury suffered against Vancouver. Lundell is expected to be available for Florida’s game on Tuesday in Winnipeg. ... Seattle F Morgan Geekie (upper body) was out for a third straight game.

Panthers: Conclude their road trip at Winnipeg on Tuesday night.