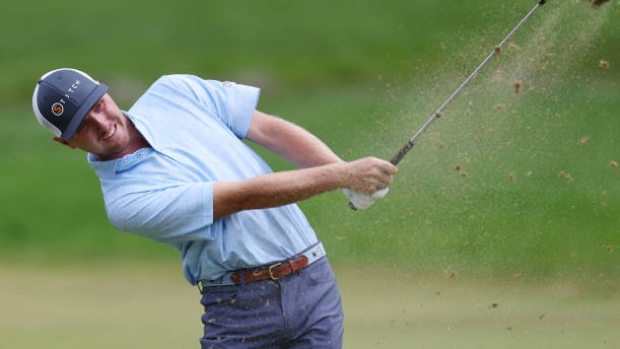 BLAINVILLE, Québec—Prior to Noah Goodwin’s win last week in Ontario, there was a five-year gap in wire-to-wire finishes on PGA TOUR Canada. Now, it’s looking more and more like there might be two in seven days.

Ryan Gerard is on the cusp of doing so at the Québec Open at Club de Golf Le Blainvillier. He’s 17-under after 54 holes and takes a four-shot lead into Sunday’s finale. The former University of North Carolina standout fended off any serious challenges with a back nine that featured four birdies and an eagle.

“I just really played solid and did exactly what I needed to do,” said Gerard, who credits good approach shots for his success on the final holes. An eagle on No. 11 was his first as a PGA TOUR Canada member.

Gerard enters the final round with a four-stroke advantage over Justin Doeden (13-under). Gerard’s quest for a wire-to-wire win, he said, will come down to doing what he has the past three days.

“I’ve just got to take it one shot at a time. I can’t get ahead of myself,” said Gerard, who noted that the course will probably play a little bit different Sunday morning than it will in the afternoon. “I’ve just got to stay patient and keep doing my thing. If I do what I need to do, I’ll be just fine.”

As for the actual task of leading from Thursday to Sunday, Gerard doesn’t think there’s any difference in finishing things off.

“Winning is hard in general,” said Gerard, who added he just wants to play his game, stick to the plan and hopefully come out with a win.

Gerard’s nearest challenger, Doeden, matched the leader with a round of 66, tying for low-round-of-the-day honors. Doeden racked up eight birdies on the day. Monday qualifier Chris Crawford continued to play well. He’s all alone in third, at 11-under. A large group—featuring Bryce Hendrix, Ian Holt, Jeffrey Kang, Drew Nesbitt, Joey Savoie, Blake Wagoner and Thomas Walsh—follows at 10-under.

“[Sunday] is just go time, really,” Nesbitt said. “I’ve got to make some birdies. There are a lot of good players to catch, but we’ll see what we can do.”