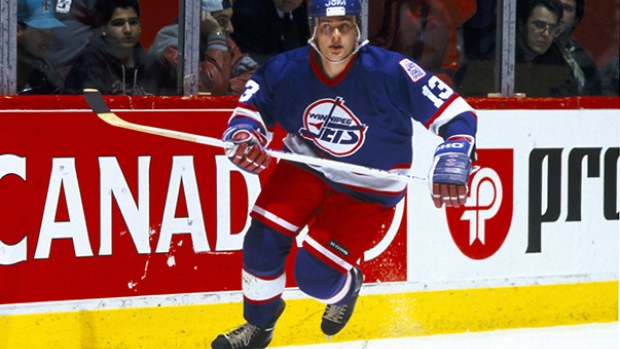 The Winnipeg Jets have announced that Teemu Selanne and Teppo Numminen will be inducted into the team's Hall of Fame in November.

Selanne and Numminen will be the ninth and 10th members of the Jets' Hall of Fame, joining Bobby Hull, Ulf Nilsson, Anders Hedberg, Dale Hawerchuk, Ab McDonald, Lars-Erik Sjoberg, Randy Carlyle and Thomas Steen as members of the Winnipeg Jets Hall of Fame.

“Winnipeg gave me my start in the NHL and holds a special place in my heart,” said Selanne. “I have a lot of great on-ice memories from my time playing in the city, but equally as many off-ice memories in a community that has made me feel like one of their own since day one. I feel beyond privileged to be recognized by the Jets in this way, and to do it alongside my good friend Teppo is a true honour.”

“To be inducted into the Winnipeg Jets Hall of Fame alone means a great deal, but to be inducted with Teemu is beyond words for me,” said Numminen. “I couldn’t have asked for a better city to play the first eight years of my NHL career in, and to be recognized in front of the same passionate community that made playing hockey a treat every single night will be an unforgettable moment for my family and I.”

Selanne, 52, played parts of four seasons for the club after being selected 10th overall by the Jets in the 1988 NHL Draft. The Helsinki, Finland, native made his NHL debut in the 1992-93 season, where he set the rookie record for goals and points with 76 and 132, respectively, en route to the Calder Trophy and the first of 10 All-Star appearances. Selanne scored 147 goals and 306 points in 231 games with the Jets before he was traded to the Mighty Ducks of Anaheim midway through the 1995-96 season.

Over his 21-year NHL career, with the Jets, Ducks, Colorado Avalanche, and San Jose Sharks, Selanne scored 684 goals and added 773 assists for 1,457 points in 1,451 games. He sits 16th on the all-time NHL scoring list and 12th on the all-time goals list.

He won his only Stanley Cup with the Ducks in 2007 and was inducted to the Hockey Hall of Fame in 2017.

“Teemu and Teppo have made indelible marks as part of Winnipeg Jets history and have deep connections to the city and with Winnipeg fans,” said Mark Chipman, Executive Chairman of the Winnipeg Jets. “We are excited and honoured to celebrate their outstanding achievements as Winnipeg Jets and make our admiration and gratitude official with an induction into the Winnipeg Jets Hall of Fame.”

He was selected by the Jets in the second round (29th overall) in the 1986 NHL Draft. The Tampere, Finland native played in 1,372 games over his 20-year NHL career with the Jets, Coyotes, Dallas Stars, and Buffalo Sabres scoring 117 goals and 637 points.