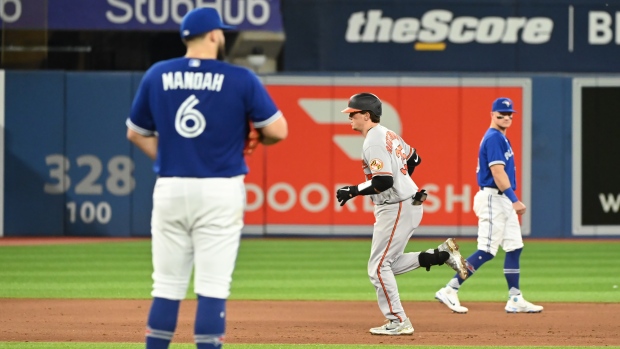 The Toronto Blue Jays are confident they'll be able to reach the playoffs despite the possibility of falling out of a postseason slot with another loss to the Baltimore Orioles on Wednesday.

The Blue Jays are 2-8 in their past 10 games and have dropped two straight to the Orioles, allowing Baltimore to close within a half game of jumping Toronto for the third and final American League wild-card spot.

"You just have to trust yourself," Jays star Vladimir Guerrero Jr. said after the team's 4-2 loss on Tuesday, their third straight defeat. "I've been telling the guys to keep trusting themselves and keep working hard. It will turn around somehow."

Toronto's starting pitching staff has struggled throughout the month of August and all-star Alek Manoah was credited with his second straight defeat after allowing all four runs in 5 2/3 innings of work on Tuesday. The 24-year-old righty has a 12-6 record with a 2.71 ERA - good for 10th best in the MLB - and a 1.04 WHIP.

"We're still in a playoff spot, and we know we're a playoff team," Manoah said. "We're struggling a bit right now, but we'll get it rolling again."

After seeing immediate success under interim manager John Schneider after firing Charlie Montoyo last month, the Jays are now 15-12 since making the change. The team was 46-42 to start the season under Montoyo.

"This is a close group, and it's a really talented group," Schneider said. "We have no doubt that we're going to be playing better baseball very soon, and between the guys we have and the guys who are established veterans in the clubhouse, I know that they're gonna pick it up."