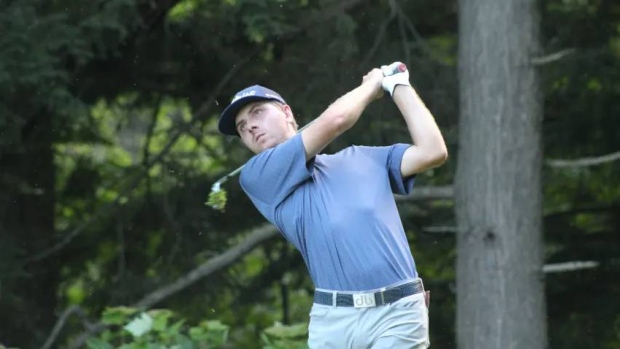 BLAINVILLE, Québec—For the second consecutive week there was a wire-to-wire winner on PGA TOUR Canada. Ryan Gerard accomplished the feat Sunday in the Québec Open at Club de Golf Le Blainvillier. The former University of North Carolina star capped off his four rounds by finishing 16-under, winning the tournament by one stroke over Thomas Walsh.

It was only the second wire-to-wire finish on PGA TOUR Canada since 2017. The other, however, came just seven days ago. Noah Goodwin won the Sotheby’s International Realty Canada Ontario Open in identical fashion.

“It was a really cool experience. I just really tried to stay patient and stay calm out there today,” Gerard said. “I knew I was leading by quite a few at one point, but I just tried to take it one shot at a time. You never know what can happen.”

Walsh managed to make things challenging for Gerard. Walsh had an eagle on No. 2 and picked three birdies in moving to 15-under overall through 11 holes. That’s when the wind picked up, and Walsh wound up playing even-par the rest of the way.

“I didn’t think catching Ryan was going to happen,” Walsh said. “I played with him [Saturday], and the kid is a stud. So, I just wanted to at least make him earn it.”

Gerard had a fairly conservative round going early on. He had birdies on No. 5 and No. 7. Difficulties came down the stretch, with bogeys on the ninth, 16th and 17th holes. It forced him to make a par on the 18th hole to avoid a playoff, which he did. It tightened the eventual margin of victory but failed to alter Gerard’s perspective.

“You just really have to lock in and stay focused on your game. You can’t worry about what anyone else is doing,” said Gerard, who shot a 73 on Sunday. “You’re just focused entirely on what you need to be doing. Everything else is a distraction.”

Before prevailing in his fourth tournament as a professional, Gerard missed the cut at the Osprey Valley Open presented by Votorantim Cimentos - CBM Aggregates. He tied for 26th at the Sotheby’s International Realty Canada Ontario Open last week and finished in an 18th-place tie at the Prince Edward Island Open. The 23-year-old from Raleigh, North Carolina, earned conditional status with a 15th-place finish at the Qualifying Tournament in Weston, Florida, in February.

Gerard credits his victory here to playing three solid rounds to give himself a big enough lead going into Sunday.

“I managed my game really well this week,” he said. “I didn’t throw shots away. I hit the shots where I needed to. I struck it well. I kept it on the proper side of the hole. That allowed me to stay aggressive when I was hitting putts and not letting anything get away from me. I think that was probably the biggest key.”

Everything else, he continued, just lined up.

“And sometimes it’s your week and you win,” Gerard added.

There was a three-way tie for third. Jeffrey Kang, Jake Knapp and Travis Trace all finished at 13-under. Knapp had the best round of the day. He shot a 65 and moved up the leaderboard with eight birdies, including seven on the first 12 holes.

“It’s always nice to get off to a good start,” said Knapp, who felt he played well all week but just didn’t score well. “It felt good to have some putts fall and hit some shots a little closer today.”

PGA TOUR Canada takes a break next week. It resumes Aug. 18-21 in Winnipeg with the CentrePort Canada Rail Park Manitoba Open at the Southwood Golf and Country Club.