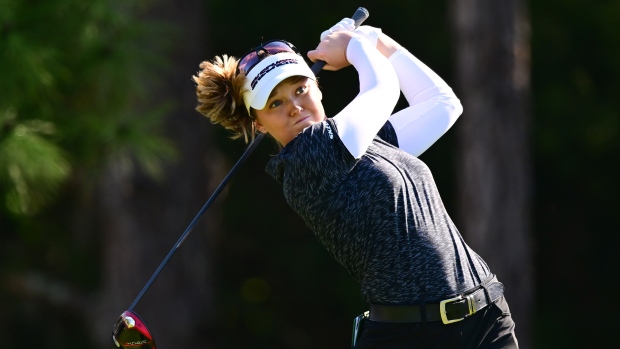 It wasn’t as tidy as either of her first two rounds, but Brooke Henderson held her spot on the top of the leaderboard at the Hilton Grand Vacations Tournament of Champions and heads to Sunday looking to win her 13th LPGA title.

The 25-year-old rolled in four birdies but also stumbled with just her second bogey of the week en route to a 69. That was good enough for a three-shot lead over Nelly Korda and Nasa Hataoka.

"I wasn't as smooth out there today,” said Henderson, “but I feel like we fought it out pretty well. I still was hitting the ball very well and giving myself a lot of opportunities, so no complaints there.”

For the third consecutive day, Henderson started her birdie binge on the par-5 second. After a string of pars, she added a second birdie on the ninth hole to make the turn in 34. She made a birdie on the 11th, her third par-5 of the day, but gave that back on the next hole with a bogey when her approach shot came up short of the green and her approach left her looking at a 10-foot putt for par.

On both 14 and 15, Henderson had good looks for birdie but the putter that was red hot on Thursday and Friday became somewhat cooler and she missed both opportunities from short range. She did counter those by draining a slippery 18-footer on the 16th hole, pushing her score to 14 under for three rounds.

“That putt on 16 was a huge help,” Henderson said. “I had missed two short birdie putts on 14 and 15, so to make a long bomb like that, that was sliding, I was super excited to make that, and so it just kind of gave it a little bit of momentum and was able to make two pretty decent par saves on 17 and 18.”

Overall, her game was still strong as she missed just two fairways, both only by a foot or two. Her iron play was also solid and she reached 15 of 18 greens in regulation. The 30 putts she needed was the most of the first three days but still good. In each of her 12 wins, Henderson has averaged less than 30 putts per round. She has averaged 28 so far this week.

“Wasn't making the same amount of putts that I did the other days,” Henderson admitted, “but the putter still feels really good, and I'm just super excited to be in contention and in the final groups first tournament back. Just a great feeling, and grateful to be here and hopefully tomorrow is a good day.”

The 25-year-old has a good record when taking the lead into the final round. She’s been the leader or tied for the 54-hole lead 10 times in her career and won on eight of those occasions.

The best round of the day was posted by Hataoka, who made birdies on seven of her last 10 holes for a 66. Korda began her round with a bogey but managed five birdies the rest of the way for a 68.