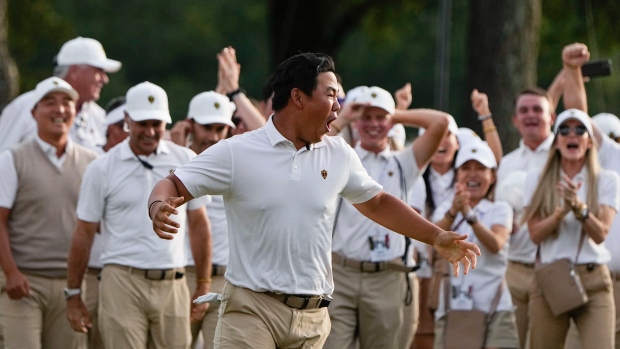 CHARLOTTE, N.C. -- The end result of the Presidents Cup was probably about what was expected. The American team was impressive and dominated. The Internationals were feisty and fought hard, but once again lost.

It’s been the same script for this event almost every time it’s been played since the first one back in 1994.

But perhaps what wasn’t on the menu was just how much fun the event became, and for a while on Sunday, how close it became. It wasn’t supposed to be that way. In fact, lots of prognosticators predicted a lopsided U.S. win that would set records.

There’s little doubt that on paper, this was one of the most powerful American teams assembled. All 12 players sit inside the top 25 in the world ranking. Many of the team members were part of the Ryder Cup squad that last year overwhelmed the Europeans, winning by 10 points.

The Internationals? They were a team without several key players who bolted to LIV, making them ineligible. There were eight rookies, all experiencing the pressure of playing for a team at this level for the first time. No one gave the team a chance, and while they did lose, they made it a battle. To put it in proper perspective, the Internationals, led by captain Trevor Immelman, overachieved. At least that’s the way it may have seemed to all except those on the team.

“This team's got plenty of heart,” said Adam Scott, “and that's thanks to everything Trevor's put in the last couple years. He's bled for this shield that we now talk about, and it's just the beginning for this team, really.

“I think you're seeing a lot of guys here who will be returning on the next one. If they don't, they will have tried their ass off to get on this team. And the week when they put it together and they've got the heart, I think the U.S. team's really going to be up for a helluva fight.”

After a couple of sessions on Thursday and Friday where the U.S. side dominated and looked as if they were going to reach a record point total, Saturday’s play delivered plenty of those moments usually reserved for Ian Poulter against the Americans. The Internationals fought back, played with some passion, intensity, and even a little in-your-face-America attitude. The U.S. team suddenly seemed a bit frustrated and not so confident.

There was Tom Kim holing putts from long distance and Cam Davis hitting lasers to the last few greens. Not many golf fans were aware of those two players prior to this week. They know them now.

“When you consider that we were 8-2 down on Friday evening,” said Immelman, “this team is no joke, and I'm sick and tired of it being spoken of as a joke. We love this event, and we love our team, and we cannot wait to run this back and have another shot.”

Immelman spoke these words with passion – with a touch of anger even. As he did all week, he defended and praised his team even after all the play had ended. In return, the 12 golfers stood firmly behind him.

“I've seen the fight in these guys throughout the course of the year,” he stated, “but particularly in the last three weeks or so, since our team was eventually finalized.

“And so, I'm not surprised. Like I said, these are great athletes up here, and this team is no joke. And we'll fight 'til the end every single time we put the shield on. That's what this team stands for.”

The South African who now spends most of his time as lead analyst for CBS, spent the last three years defending the Internationals and fending off calls to change the format. He carried the torch lit by Ernie Els three years earlier when the shield was created, an emblem that, for the first time, gave the team some identity.

It's a young process to try and bring players from different countries, cultures and with different languages together, but Immelman has built upon what Els started. He leaves Charlotte with the Internationals as much of a team as ever.

“Trevor's team did an incredible job of – we talked the other night about their shield,” said U.S. captain Davis Love. “They're doing an incredible job of trying to rally and build a team and get an identity, and they certainly came together and started making some putts.”

The job to carry this forward will likely now fall in the hands of Mike Weir. He’s expected to be named the International captain for the next Presidents Cup, slated for Montreal in 2024. He shares a similar passion and drive to Immelman’s and he’s certain to be as demanding of his players.

It’s still going to be a difficult task to take down the Americans, but when it happens – and it will happen – Immelman and all those who saw what an International team could be, are going to be smiling.