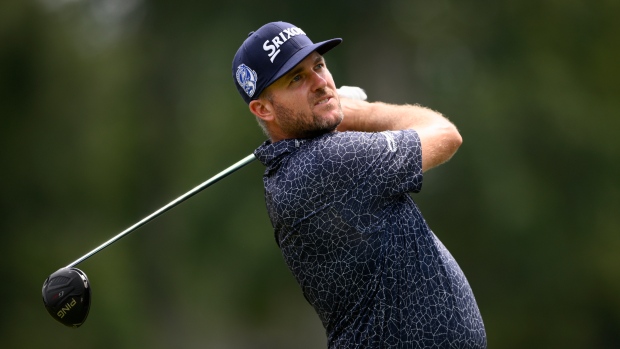 CHARLOTTE, N.C. – By his own admission, Taylor Pendrith is more than a little shocked to be playing for the International Team at this Presidents Cup. After all, he is a PGA Tour rookie and one who missed four months of the season with a broken rib.

He has the lowest ranking of any golfer in the competition, the only player outside the top 100 in the Official World Golf Ranking. Yet he also seems to be surrounded by the most curiosity, with fans, media and players anxious to see just how talented he is.

“I mean, it was amazing,” he said of getting the call from team captain Trevor Immelman to include him on the team, “but I was kind of surprised. Not surprised, but shocked, I guess. I mean, I know I've had a really good last two months after coming back from injury. But obviously, to be a part of this team is, like I said, an honour, and I was super excited.”

Outside of Canada, Pendrith is not yet widely known. He’s had some television time while vying for titles in Bermuda and Detroit, but other than that hasn’t yet cracked the mainstream.

There’s a sense that could change this week. In a big way. Pendrith’s immense talent is set to be put on the world stage. His prodigious length has been his calling card so far but his game is well-rounded with some silky hands around the green and a putter that continues to improve. His calm demeanour and disarming personality are qualities that shine through beyond his golf. He’s likeable almost from the moment you first meet him.

At a media availability ahead of Thursday’s opening matches, Pendrith was getting the most attention of any player on his side. Media surrounded him and he calmly answered question after question. He was even quizzed about his favourite hockey team, the long-suffering Toronto Maple Leafs, who share a similar success rate as the International Team when it comes to the big matchups.

When the questions stopped, he shook his head and summed up that last 12 months.

“This year has been – it's been so weird, you know,” he stated. “Like being a rookie, being excited to be [a] full-time member, having an unbelievable week at The Players. Had a lot of confidence. And then to just shut it down for four months was not how I envisioned my rookie year going. But obviously, take the time off, get better, and come back, and finish the year strong and still had a chance on Sunday to make it to the Tour Championship, an outside chance. That's all I can really ask for.”

He's had a flurry of different injuries over that period from shoulders to elbows to palms . . . yes, palms. The broken rib in March was just an addition to the list.

But now he’s healthy and showing just exactly what he can do.

The Richmond Hill, Ont., native got the call for the opening day’s play and will go out on Thursday alongside Mito Pereira in the final foursomes match of the day against Americans Tony Finau and Max Homa, a tall task but one that could be crucial for the Internationals.

Pendrith is ranked ninth in driving distance while Pereira is 14th in greens in regulation. Combined, those two qualities could produce strong performance if they can hole the odd putt or two.

There’s every reason to believe that Canadian golf fans will get what they want on Friday in the fourball matches, where the pairing of Pendrith and Listowel, Ont., native Corey Conners seems almost inevitable. The two have played golf together since their junior days, playing for Team Canada, as teammates at Kent State University and even in their early days as pros. Outside of golf, they have been roommates and each was the best man at the other’s wedding.

“To be here with him is really special,” said Conners, “and if we have a partnership, I think we can certainly feed off of one another. If I hit a poor shot, I know he's going to bail me out, and if he struggles on a hole, I'm going to be giving it my all to give us a chance to win the hole.

“I think our relationship, we're certainly great friends and have played a lot of golf together, so very confident in his ability. I think we'd be certainly a good team.”

Pendrith would love to play alongside Conners but if that doesn’t happen, he is ready to do whatever he can to aid the team.

“We're ready to go. All 12 of us are ready to go,” he stated. “And, you know, obviously, it's been a challenge for captain Immelman over the last few months, but we're here and we're ready to battle, and it's going to be a fun week.”

It could also become a very big week in the career of Taylor Pendrith.