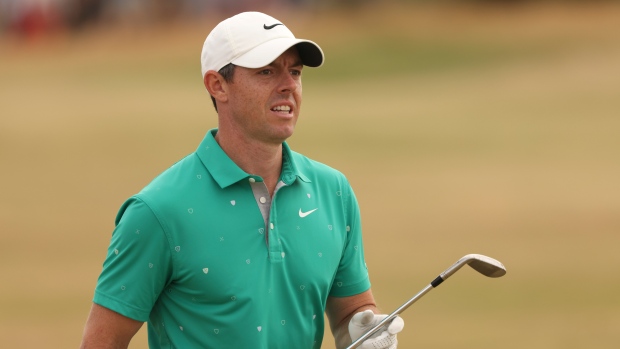 For yet another week, the battle between the PGA Tour and LIV Golf was the main topic of discussion in golf circles.

With the legal hearing on Tuesday between the two sides and the rumours of Cam Smith heading to LIV, it was all the chatter at TPC Southfield, where the first event in the FedEx Cup playoffs is set to begin on Thursday.

It was heard in the locker room, on the putting green, from players, caddies and officials. It was also among the first questions asked to players who made their way into the interview room.

“From my vantage point, common sense prevailed, and I thought it was the right decision,” said Rory McIlroy of the judge’s decision on Tuesday to refuse a temporary restraining order that would have allowed Talor Gooch, Matt Jones and Hudson Swafford to play the next three PGA Tour events.

“Now that that has happened, I think it just lets us focus on the important stuff, which is the golf, and we can all move forward and not sort of have – not have that sideshow going on for the next few weeks, which is nice.”

It has been this way for some time now, with the two sides battling for attention. There’s been more attention given to players moving from one tour to the other than how those players perform on the course. For many golfers, it’s become tiresome and more than a little distracting.

“It's unfortunately just taking up the golf world a little bit and taking away from great storylines,” said Justin Thomas. “I think I saw Scottie [Scheffler] came in and did his interview yesterday and I'm sure he got asked about what was going on, and he's had one of the best seasons of all time. I mean, the most money that's ever been earned and winning the FedEx Cup by a mile and I'm sure there weren't as many questions about that as there should have been.”

Thomas related a story of being at a wedding recently and while making his way to the bathroom, was stopped by another guest and asked for his opinion on LIV.

“The only thing I really care about is this golf tournament and trying to play well and trying to win the FedEx Cup,” he said with a note of exasperation.

While the players have taken sides since LIV was first announced, to this point it has been somewhat cordial with those on each side respecting one another. But the legal actions seemed to harden the parties and that may not lift anytime soon. The antitrust suit filed against the PGA Tour by 10 LIV players won’t start until next fall at the earliest. Among the PGA Tour players, the suit seems to be a direct shot against them personally.

“You can have your cake, but you don't need to eat it, too,” added Thomas. “And they got their fair share of a large, large amount of cake and go eat it on your own means. You don't need to bring it onto our tour. I think we keep it how it is, and we can continue to build an unbelievable product that's given a lot of us like myself a great platform to just keep improving it.”

“I certainly have a little more respect for the guys that haven't put their names to the suit,” stated McIlroy. “So yeah, I mean, it's become a little more personal because of that.”

The Northern Irishman has become the Tour’s de facto spokesperson even though it wasn’t a job he sought out. His frequent trips to the media room, along with his candid comments, have put him front and centre. Earlier this year, his peers voted him chairman of the Player Advisory Council, a group of golfers who deal with issues and work with the tour’s staff on all matters.

Still, he says he doesn’t speak for anyone other than himself even though he’s constantly being asked for a statement. In a strange way, however, that role has helped him improve his game.

“I feel when I then get myself inside the ropes, it's like no one can get to me and it's really nice,” stated McIlroy. “So, it's actually made the golf part of it way more enjoyable, and I sort of appreciate it a little bit more because of all the other stuff that's going on. If anything, it's probably helped my golf just because I, you know, I can get out there and I can not think about it and compartmentalize everything and maybe enjoy competing a little bit more, or at least appreciate it a little bit more with everything else that's going on.”

On Thursday, the focus should shift more to the action on the golf course as the first event in the FedEx Cup playoffs get underway. However, with Scheffler leading the way and Smith sitting second, things might get stirred up again with a PGA Tour player versus an alleged, soon-to-be LIV player battling it out.

It seems it will be a long time before it all goes away.