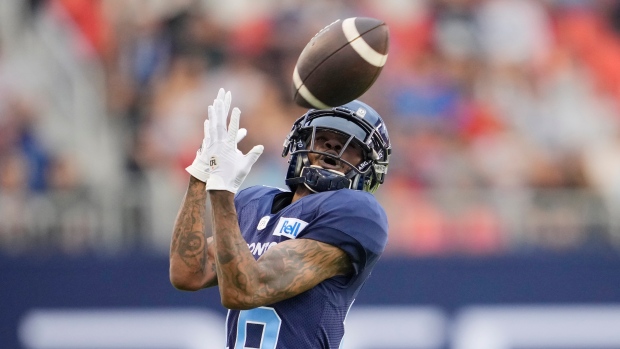 For eight seasons, Brandon Banks served as a pillar of the Hamilton community and the star wide receiver for the city's beloved Tiger-Cats.

On Friday, the 34-year-old Banks returns to Tim Hortons Field (TSN 4/5, 7:30 pm ET/4:30 PT) as a Toronto Argonaut and on the opposite side of a nearly century-old rivalry he's become very familiar with.

Growing up south of the Canadian border in Garner, N.C., a 12-hour drive from Hamilton, Banks' football journey began in Junior College at Bakersfield College in California. There, Banks helped lead the Renegades to the top of the national ranking with a 12–1 record on the season, earning a berth in the Southern California championship game while setting a school record with 15 touchdowns.

Banks transferred to Kansas State of the Big 12 the following year in 2008. In his first season as a Wildcat, he became the second player in program history to earn the Offensive Newcomer of the Year award after having one of the best seasons in school history, recording 67 receptions for 1,049 yards and nine touchdowns as a junior.

While he made a name for himself outside of the hashes, his explosive speed and compact five-foot-seven, 150-pound frame made him a threat in the return game.

In that same season, Banks racked up 498 yards on 18 kickoff returns and five punt returns for 58 yards. His 98-yard kickoff return against the Nebraska Cornhuskers is tied for the fifth-longest in school history. His total of 1,731 all-purpose yards in '08 ranks fifth in single-season school history.

Even though Banks showed out at the collegiate level, he went unselected in the 2010 NFL Draft.

Washington came calling later and signed Banks as an undrafted free agent, but after three seasons, 41 games and a punt-return touchdown against the Buffalo Bills, he was released.

His future Hall of Fame career in the Canadian Football League began at the tail-end of the 2013 season when he signed with the Tiger-Cats. Appearing, predominantly, in the return game alongside Onrea Jones and Tavoy Moore, Banks' talent started to shine in 2014 when he returned a pair of punts for touchdowns in the Tiger-Cats' 40-24 win over the Montreal Alouettes in the Eastern Final, advancing Hamilton to the 102nd Grey Cup.

Banks went on to play a total of 111 games for the Tiger-Cats over eight seasons, amassing 422 receptions for 5,678 yards and 45 touchdowns as a receiver. He added another 6,822 yards and seven touchdowns on special teams, earning multiple All-Star honours and a Most Outstanding Player nod in 2019.

Banks left big shoes to fill after it was announced that he and the team decided to mutually part ways in early 2022 following back-to-back Grey Cup losses to the Winnipeg Blue Bombers.

In a heartfelt statement issued by his former team, Banks thanked the city he called his second home for eight seasons.

"I don’t even know where to start. In 2013 I was driving to a new country, to a new city called Hamilton and couldn’t help but ask myself ‘why?’. Eight years later, I know why.

Thank you to one of the best organizations I’ve been a part of for making me into the man I am today. Thank you for the opportunities, thank you for believing in me and thank you for fighting for me, even when I was wrong. I want to personally thank Mr. Caretaker Bob Young, Mr. Scott Mitchell, Shawn Burke, Coach O, Coach Jones, Coach Austin and all the coaches who were with me for this journey.

Thank you to ALL my teammates who I’ve had the honour of sharing the Ticats helmet with. Every year that locker room was full of life!

Tiger-Town… Wow, thank you so much for welcoming me and my family to your city and for allowing me to make Hamilton a second home. Thank you for the great times in the community and for always making game day so special for me and my family. I always played my hardest for you, trying to bring home that Grey Cup you all deserve. I will always bleed black and gold.

After a single meeting in the preseason at BMO Field in Toronto, Banks got his first taste of the regular season Argonauts-Tiger-Cats rivalry in Week 9 in the first of four meetings between the teams in five weeks.

Ahead of the game, Banks' former coach Orlondo Steinauer talked about what it will be like facing Banks.

"Speedy (Banks) was a focal point of this organization for a long time," Steinauer said. "He's a future Hall of Famer; I've got a lot of love for Brandon as a person, and of course what he does on the field speaks for itself. So, the fact he's continuing his career is outstanding, and he can still score from anywhere on the field."

Banks was held in check by the Tiger-Cats’ defence, recording only a single reception for 15 yards as the Argonauts downed the Tiger-Cats 34-20 last Saturday.

As Friday’s rubber match approaches, Banks will undoubtedly receive a thunderous applause from the Hamilton faithful but the Argonauts, at 4-3 on the season, only hold a two-game advantage over the Tiger-Cats (2-6) making the game even more meaningful.