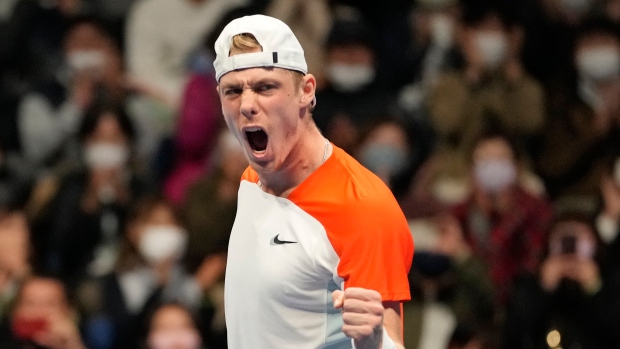 The seventh-seeded Canadian advanced to the seminals with a 6-4, 6-3 win over Croatia's Borna Coric on Friday.

"I think I played great today," said Shapovalov. "In general, my level the last two weeks has been great, so I'm very happy to be back in the semis."

The 26-year-old Richmond Hill, Ont. native, who is coming off a final appearance at the Korean Open on Sunday, has yet to lose a set in Tokyo.

Shapovalov will next face American Taylor Fritz, who advanced to the Japan Open semifinals after Nick Kyrgios withdrew because of a left knee injury on Friday.

Fritz, who spent a week in quarantine after testing testing positive for COVID-19 in Seoul last week, will meet Shapovalov for the fifth time in his career. The Canadian was a winner in four of those matches.

The 23-year-old Fritz was a last-minute arrival in Tokyo, due to his COVID-19 diagnosis.

"So for sure the rest was nice for him today," Shapovalov said. "He's a very difficult opponent. I think it's going to be a great match for both of us. I think we're both very exciting to watch and we've had some amazing battles in the past, so it's going to be really fun tennis."

Frances Tiafoe reached the semifinals by beating Miomir Kecmanovic 6-0, 6-4. Tiafoe, who has not dropped a set in Tokyo, will be making his fourth semifinal appearance this season.

“I was moving really well. I hit the ball well from the back of the court,” Tifoe said. “I made it really tough for Miomir today. He played some great tennis. I was lucky enough to get it done in straight sets. Performances like this are big.”

Tiafoe will next take on Kwon Soon-woo. The South Korean defeated Pedro Martinez 6-3, 6-0.

Kyrgios' knee injury also forced him to withdraw from the doubles semifinals, where he and partner Thanasi Kokkinakis were scheduled to play Mackenzie McDonald and Marcelo Melo.