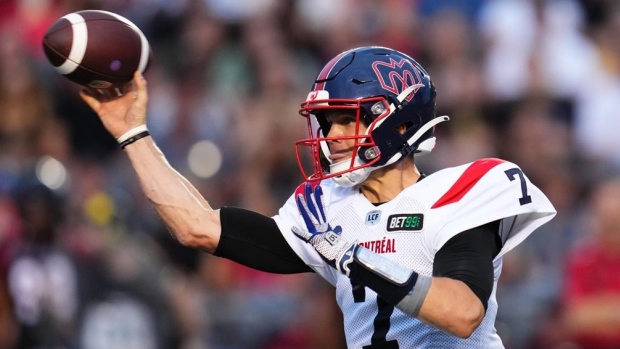 Montreal Alouettes quarterback Trevor Harris did not take any reps under centre on Sunday as he was given a rest day, head coach and general manager Danny Maciocia told reporters following the session.

Maciocia noted that Harris isn't suffering from anything serious and could have practiced today but was kept out for precautionary reasons. Harris is expected to practice Tuesday and suit up for Thursday's rubber match with the Winnipeg Blue Bombers with Dominque Davis backing him up.

#AlsMTL Trevor Harris says he has a lingering back issue stemming from the hit for which the injury spotter had him sit late in the Hamilton game. Harris says he tweaked it last Thursday vs Bombers but is expected to start Thursday in Winnipeg. #CFL @TSN_Edge

Harris later told reporters that he is dealing with a lingering back issue stemming from the injury against the Hamilton Tiger-Cats that saw him leave the game at the direction of a concussion spotter. Harris continued to note that he re-aggravated his back against the Bombers and decided light work on Sunday was the best option for him.

Eugene Lewis started to practice but removed his pads after the team's first offensive drill. Maciocia told reporters that Lewis sat out the bulk of practice for maintenance purposes.