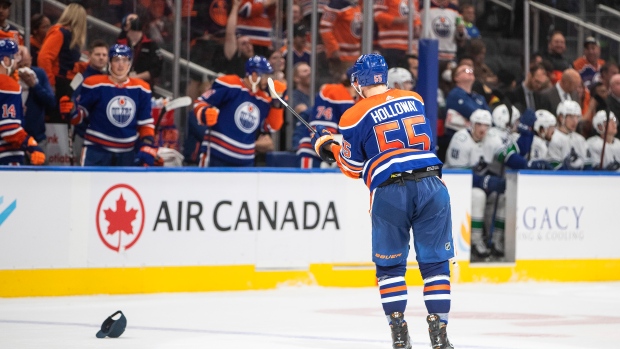 EDMONTON — It would appear you can add Dylan Holloway’s name to the Edmonton Oilers season-starting roster in indelible ink.

Holloway had three goals and an assist and Zach Hyman had a goal and two assists as the Oilers came away with a 7-2 NHL pre-season victory over the Vancouver Canucks on Monday.

“It was kind of one of those nights where everything seems to go right,” said Holloway, the recently turned 21-year-old rookie who made his official NHL debut in Game 4 of last year’s Western Conference Final against Colorado.

“I saw that I was playing with Leon (Draisaitl) and Zach (Hyman), so obviously I was pretty excited. And my adrenalin was going there right from the start. So yeah, super excited all day and just felt good.”

“Look at our forwards — they’re so deep, and it’s hard to make this team. He’s doing everything possible to not allow the coaches to say no,” Hyman said.

“I can't say enough good things about him. It’s just one game here, but he’s done it in previous games, and he’s got to keep doing it over and over again. He’s doing a great job.”

Warren Foegele had a pair of late goals and Tyson Barrie also scored for the Oilers (4-2 in pre-season) who dressed close to their full regular-season lineup.

Nils Hoglander and Conor Garland replied for the Canucks, who had few familiar faces playing in the contest. Vancouver has yet to enjoy any pre-season success, falling to 0-3-2.

“To me it wasn’t a 7-2 type game,” said Vancouver head coach Bruce Boudreau. “With five minutes to go it was 4-2 and we had just killed off a five-on-three and were about to pull the goalie when they scored. The wind just went out of the sails of everybody and they quit for a couple minutes.”

Holloway continued to make an ironclad case to be on the Oilers' opening night roster with the game’s first goal midway through the opening frame. He made the most of an appearance in the top six by tipping home a long shot from Darnell Nurse past Vancouver goalie Collin Delia.

Vancouver pulled even on their fifth power play just 4:22 into the second period as Hoglander finally got one past Oilers netminder Jack Campbell, beating him glove side with a wrist shot.

Edmonton regained the lead 12 minutes into the middle period on a power play of its own as Connor McDavid sent a puck in front and Hyman was able to direct it home.

Just 26 seconds later, it was 3-1 for the Oilers as Holloway outwaited a sliding defenceman and then cleanly beat Delia for his second of the game.

Vancouver responded less than a minute after that as Garland was credited with a goal that deflected a couple of times before hitting defender Cody Ceci and slipping through Campbell’s legs.

Edmonton restored its two-goal edge as Hyman showed some patience in feeding a pinching Barrie for a goal with just over a minute remaining in the second.

Holloway got his hat trick goal with 2:41 remaining in the third as he took a loop behind the net before firing it past Delia for his fourth of the pre-season.

Foegele scored 46 seconds later on a two-on-one and then got another one less than a minute later on a give-and-go with Devin Shore. The two teams square off again on Wednesday in a game being played in Abbotsford, B.C.

Both squads complete their exhibition schedules on home ice on Friday as the Oilers host the Seattle Kraken and the Canucks face the Arizona Coyotes.

NOTES: It was the first full start for goaltender Campbell in an Oilers uniform, having made saves on seven of eight shots in half of a game in his only previous appearance against Calgary. The former Toronto Maple Leaf starter bolted to Edmonton in free agency this summer, signing a five-year, US$25-million deal after posting a 31-9-6 record with the Leafs last season. … Earlier on Monday, the Canucks sent six players to their AHL affiliate in Abbotsford — Vincent Arseneau, Marc Gatcomb, Chase Wouters, Matt Alfaro, Michael Regush and Jett Woo — leaving their current pre-season roster at 42 players.