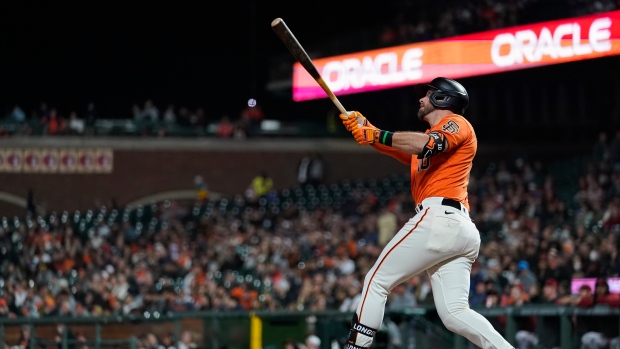 Mike Yastrzemski and Austin Wynns also went deep as San Francisco Giants (79-78) moved above .500 for the first time since Aug. 17.

The Giants also kept their slim wild-card hopes going with five games remaining, though a loss or a win by Philadelphia will eliminate them.

San Francisco is trying to become the third team in major league history to finish at or above .500 after being eight games under with 16 or fewer games to play. The last team to accomplish that was the 1925 Cardinals.

Longoria, who has missed a combined 54 games over three stints on the injured list, hit a three-run drive in a four-run first. The next inning, he delivered a two-run homer to center. Twice this season, he’s homered in both the first and second innings of a game.

Before Longoria’s homer in the second, Joc Pederson took a wild ride around the bases, leading off the inning with a triple that ricocheted off the right- field wall and bounced back toward the infield. He came home to score on the play when Josh Rojas throw from the outfield skipped past the cutoff man.

Alex Cobb (7-7) picked up the victory with five innings of four-run ball.

INF Wilmer Flores was honored before the game as the Giants’ 2022 recipient of the Willie Mac Award, given annually to the player who best exemplifies the “competitive spirit, ability and leadership” of Giants Hall of Famer Willie McCovey. The award is voted on by Giants players, coaches, staff and fans.

Flores addressed the home crowd during a pregame presentation and got to catch the ceremonial first pitch from his father, Wilmer Sr. He entered the night hitting just .231, but a sacrifice fly in the sixth gave him a team-high 71 RBIs.

Diamondbacks: INF Ketel Marte was placed on the injured list for an unspecified reason before Friday’s game, ending his season. Marte originally was in the lineup at second base, but Rojas shifted from third to second and Emmanuel Rivera started at third. Marte, who turns 29 later this month, hit .240 with 12 homers and 52 RBIs in 137 games. INF Buddy Kennedy was recalled from Triple-A Reno to take his roster spot.

RHP Drey Jameson (2-0, 0.98) goes Saturday for Arizona in his fourth career start. He’s allowed just two runs over 18 1/3 innings in his first three outings. The Giants have yet to announce their starter.