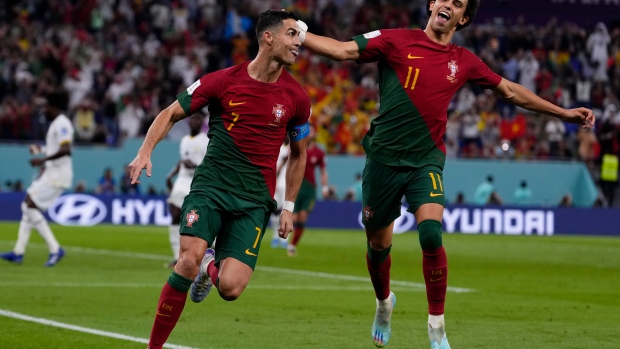 A promising start to Match Day 2 ended in major disappointment for Canadian soccer fans on Sunday.

After taking an early 1-0 lead, it seemed like Canada had the potential to pull off the latest in a string of notable upsets at FIFA World Cup 2022.

However, Croatia responded with four goals, marking the second time in this tournament that a team scored four goals after allowing the first of the match.

Canada’s hopes of advancing to the knockout stage came to an end with the loss to Croatia.

However, the Canadian Men’s National Soccer Team still has a lot to be proud about following its second ever World Cup appearance.

It will be very interesting to see how they fare against Morocco in their group stage finale.

Meanwhile, there is a lot left to be decided with another four Match Day 2 contests to be played on Monday.

Here is a look at what’s on the line.

Cameroon and Serbia will kick off Monday’s action needing a win or draw at minimum to avoid elimination.

Cameroon would be eliminated with a loss and a Brazil win or draw versus Switzerland.

I always root for Cameroon when they make it to World Cup. 2nd choice this time though. pic.twitter.com/O3xWdLQq4m

Serbia would be eliminated with a loss and a Switzerland win or draw versus Brazil.

In this scenario, Serbia is the heavy favourite to win this match at -135 at FanDuel.

Cameroon has lost eight straight World Cup matches, which is the second-longest losing streak in World Cup history by any team.

Following a draw with Uruguay in its opener, South Korea has a golden opportunity to move a big step closer to the knockout stage with a win over Ghana on Monday.

FanDuel has South Korea at +155 to win the match.

There was 1 shot on goal in today's scoreless draw between Uruguay #URU and South Korea #KOR, tied for the fewest SOG in a #FIFAWorldCup match since 1966 (Scotland-Denmark in 1986).

The four 0-0 draws in matchday 1 of the tournament are the most in openers of any FIFA World Cup. pic.twitter.com/LvfL3WgMqM

While they won’t officially clinch a berth in the Round of 16 with a win, it would put them in excellent position with four points and a chance to cheer on Portugal versus Uruguay in the afternoon game.

Meanwhile, Ghana can avoid elimination with a win or draw, but after opening with a loss to Portugal, the pressure is on to find a way to earn three points.

Ghana is +195 to pull off the upset win at FanDuel.

After a 2-0 win over Serbia in its opener, Brazil can clinch its spot in the Round of 16 with a win and a win or draw by Serbia versus Cameroon.

This deserves all the angles!

Brazil has advanced to the knockout stage in 13 straight World Cups and is now -1350 to win Group G.

They’re -220 to beat Switzerland on Monday.

Portugal can also clinch a berth in the Round of 16 with a win.

Cristiano Ronaldo and company are now -360 to win Group H, followed by Uruguay at +430, which illustrates just how important this match will be for both sides.

Uruguay is +320 to pull off the upset win, which would really shake things up in Group H heading into Match Day 3.