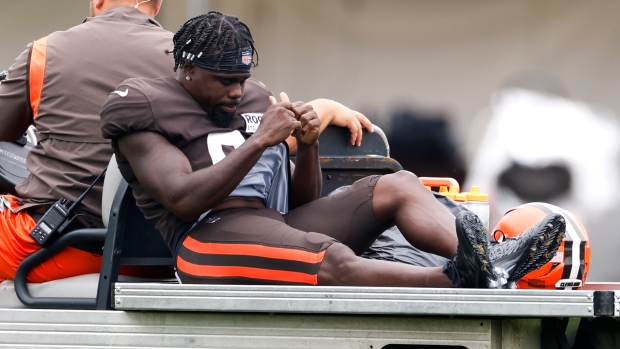 Cleveland Browns All-Pro returner Jakeem Grant has suffered a torn Achilles tendon and will miss the entirety of the season, reports the NFL Network's Ian Rapoport.

Confirmed: The Achilles is torn. Jakeem Grant is out for the season. https://t.co/7AB2etwOUE

Grant went down Tuesday in a one-on-one drill and was carted off. Multiple reports indicated the Browns believed he had suffered an Achilles tear.

“I really feel awful for Jakeem," Browns coach Kevin Stefanski told reporters. "We’ve witnessed how hard the young man has worked since he got to our team. We all realize injuries are a part of our game, but that doesn’t make it any easier to accept especially for someone that works as hard and carries himself like Jakeem.”

The 29-year-old began his career with the Miami Dolphins in 2016 and played there for five and a half seasons before finishing the 2021 campaign with the Chicago Bears. Grant joined the Browns in the off-season and was expected to help lead Cleveland's return game.

The Athens, Texas native was selected in the sixth round (No. 186 overall) by the Dolphins out of Texas Tech.