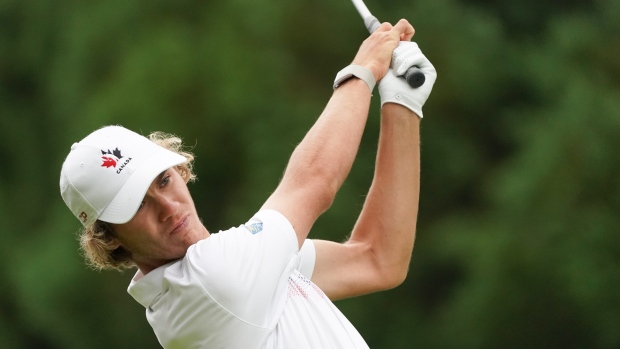 KAMLOOPS, B.C. — Jean-Philippe Parr will take a two-shot lead in Wednesday's final round of the Canadian Junior Boys' Golf Championship, but the names of those hottest on the defending champion's heels have changed.

The 18-year-old Parr, who calls St-Célestin Que., home, shot a 4-under-par 68 on Tuesday at Rivershore Golf Links to extend his stay atop the leaderboard. Parr opened the tourney on Sunday with a 70, then took the lead Tuesday by carding a blazing 62, which tied the low Canadian Junior Boys Championship single-scoring record set by Calvin Ross in 2017 and matched by Christopher Vandette in 2019.

“My wedge game and putting has been really solid recently which fits this course perfectly as there are many wedges and a lot of good birdie opportunities,” said Parr. Sliding into second and only two shots back is 15-year-old Matthew Javier of Toronto, who recorded his third eagle of the tournament, and second in as many days on the par-5 4th hole. Andre Zhu of Richmond Hill, Ont., and Ethan Wilson of St. Albert, Alta., tied for third and look to close the three-stroke gap in Wednesday's final round. In the Juvenile Boys Division, Javier holds the lead at 14 under for the tournament, with Zhu trailing by one stroke. In third place is Vancouver native Ryan Liang who came in at 9 under. Wednesday's winner earns an exemption into the 2023 U.S. Junior Amateur Championship at Daniel Island Club in Charleston, S.C., as well as a spot in 2023 Canadian Men’s Amateur Championship.

This report by The Canadian Press was first published Aug. 9, 2022.