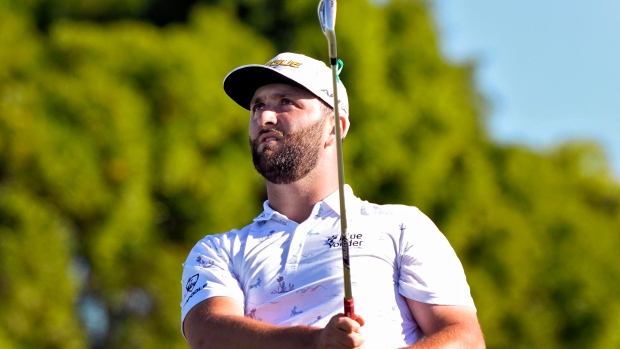 MADRID (AP) — Jon Rahm overcame early jitters from playing at home and shot a 7-under 64 in the opening round of the Spanish Open on Thursday to sit one stroke behind leaders Ashun Wu, Kiradech Aphibarnrat and Darius van Driel.

Rahm is trying to win for the third time at home and join the great Seve Ballesteros for the most Spanish Open titles.

“It’s not that my heartbeat was faster, but it was definitely a lot more intense on the first few shots and the first few putts just because I’m playing in front of he home crowd and I want to do good, and they want me to play well,” the sixth-ranked Rahm said.

Rahm made six birdies, an eagle and a bogey at Club de Campo Villa de Madrid.

“It always helps when you start with a birdie, it always helps settle things down, and then getting a nice up-and-down on the second hole got me going,” Rahm said. “It’s not that it’s more nerve-wracking (to play at home), but it just matters more, it’s a little bit more intense.”

Rahm finished in a tie for 17th in last year’s Spanish Open, when he said he arrived with more pressure because he was ranked No. 1 and had won the U.S. Open and played well in the Ryder Cup.

Wu, the Chinese player who finished in a tie for 79th in Spain last year, took the early lead after making eight birdies and no bogies in a round of 63. Thailand’s Aphibarnrat made five straight birdies after a bogey on No. 12 in a busy round of 63. He also made three other birdies, an eagle and another bogey. Van Driel had nine birdies and a bogey.

Also a shot back were Swede Joakim Lagergren and Frenchman Matthieu Pavon, who was 6 under par through the first six holes after picking up four birdies and an eagle. He added another birdie in a quiet back nine.

The other top-30 player in the field, Tommy Fleetwood, had a lackluster opening round of 70 and was tied for 47th.

Defending champion Rafa Cabrera-Bello struggled and was tied for 107th after a 74.

Rahm arrived in Madrid with increased confidence after shooting 62 in the final round of the BMW PGA Championship at Wentworth last month.

“I’m glad I could follow back up my last competitive round with another really good round and keep the good play going,” Rahm said. “It’s important to start strong. The course is only going to get harder. To come out in the morning and take advantage of the easier conditions was great.”

Rahm’s only win this season came at the Mexico Open in May.

Daniel Gavins quickly went from disappointment to joy in a two-hole span at the Club de Campo.

He rebounded from a quadruple bogey on the par-4 eighth with a hole-in-one on the par-3 ninth.

The Englishman ended shooting par for the round and was tied for 69th.