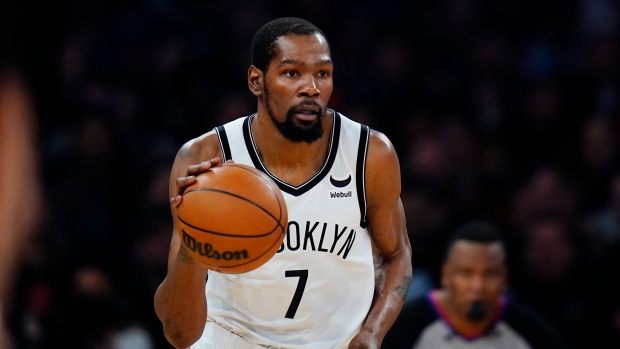 It's either me or them.

That is the ultimatum Brooklyn Nets star Kevin Durant gave owner Joe Tsai during a weekend meeting, reports The Athletic's Shams Charania, when the 12-time All-Star made it clear that he wanted a trade unless general manager Sean Marks and head coach Steve Nash were fired.

Later Monday, Tsai tweeted his support for the coaching staff and front office.

"Our front office and coaching staff have my support," Tsai tweeted. "We will make decisions in the best interest of the Brooklyn Nets."

Our front office and coaching staff have my support. We will make decisions in the best interest of the Brooklyn Nets.

Durant does not have faith in the team's direction and reiterated a desire to move on. Entering his 15th season in the league, Durant is set to begin the first season of a four-year, $198 million extension signed last summer.

The meeting, which happened on Saturday, came a little over a month since the 33-year-old Durant initially asked for a trade. Sources characterized the meeting as "transparent and professional" to Charania.

The price for Durant's services remains exceedingly high, with Charania noting that Tsai has made it known privately that he will take "every last asset" from a team attempting to acquire him.

The Boston Celtics, with a package built around Jaylen Brown, the Toronto Raptors and Miami Heat remain the three teams most likely to move for Durant, Charania notes.

As reported multiple times over the past several weeks, the Raptors' reticence to include Rookie of the Year Scottie Barnes in any package could make any trade package for Durant a nonstarter for the Nets.