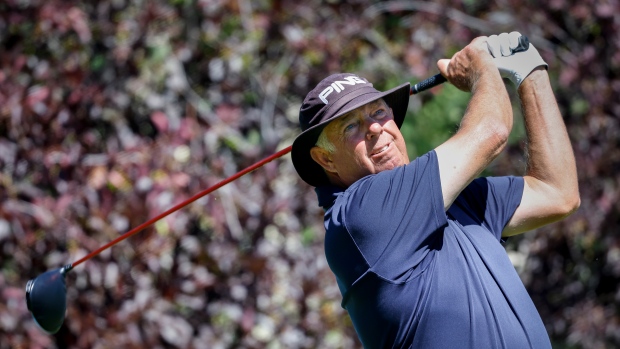 CALGARY — Kirk Triplett knows what it’s like to be in contention at the Shaw Charity Classic.

Now, the 60-year-old from Scottsdale, Ariz., would like nothing more than to win the annual PGA Tour Champions event at the Canyon Meadows Golf and Country Club in his ninth attempt.

“This is an exciting opportunity for me to go out and try to win a golf tournament,” said Triplett, who followed up the 65 he shot Friday with a 68 on Saturday to head into the final round of the 54-hole event alone at the top of the leaderboard at 7 under.

Triplett, who had three birdies and just one bogey on the par 70, 7,061-yard layout, finished in a tie for third place during the first instalment of the Shaw Charity Classic in 2013 and is one of three golfers to play in all nine events so far (the others are Olin Browne and Tom Byrum).

“I feel like if the conditions are nice tomorrow, it’s going to take a 5-under round out of me and if I shoot 5 under and somebody gets me, I’ll have done my work,” said Triplett, who tied for second spot in 2018 with Scott Parel and Joe Durant behind two-time champion Scott McCarron. “We’re all going to be trying to do the same thing tomorrow.”

Jerry Kelly had two birdies on his front nine and two more on the back to card a round of 4-under 66. That earned him a spot in Sunday’s final grouping with Triplett and Paul Goydos, who he’s currently tied with for second spot at 6 under.

“I said I want to be in that final group, I want to see what’s going on,” said Kelly, who didn’t go for the green in two on the par 5, 585-yard finishing hole and wound up making par to book his spot in that final group. “I love being in that atmosphere. You know, hopefully that plays true and (I) just make a bunch of birdies.”

After carding a round of 67, World Golf Hall of Fame member Vijay Singh is sitting alone in fourth place at 5 under, just one shot ahead of first-round leader Padraig Harrington along with Dean Wilson, Alex Cejka and John Huston.

Kevin Sutherland had Saturday’s best round of 5-under 65 to move into a tie for ninth spot at 3 under with Shane Bertsch.

Following an even-par round of 70, Alan McLean of London, Ont., is sitting in a five-way tie for 11th spot at 2 under with a group that includes defending champion Doug Barron.

“You never know when you’re going to put a good round together, right, and hopefully tomorrow that will be the case,” said McLean, who lipped out for eagle on the 18th hole after reaching the green in two. “It was carrying a little bit of speed, but all-in-all on the day, I hit the ball much the same as yesterday — maybe didn’t get away with as much, but I’m happy with the round.”

After shooting 69, Mike Weir of Brights Grove, Ont., is among a logjam of 10 players tied for 16th at 1 under.

“I’ve got to get a fast start tomorrow,” said Weir, who isn’t happy that he has three-putted the first green both days. “I’ll have to get rolling early and sharpen up early in the round. I’ve been over par both days early, so I need to go the other way and get under par and then maybe I can make some noise on the back nine.”

Canadian Golf Hall of Fame member Stephen Ames, a former Calgary resident, couldn’t get anything going during his round and shot 73 to drop him back into a tie for 47th spot at 2 over.

Although David Morland IV, who’s originally from Aurora, Ont., had a respectable round of 2-under 68, he’s well back of the leaders at 3 over.

Meanwhile, Dennis Hendershott of Brantford, Ont., had a rough afternoon and shot 81. He’s in second last spot overall at 11 over.

This report by The Canadian Press was first published Aug. 6, 2022.