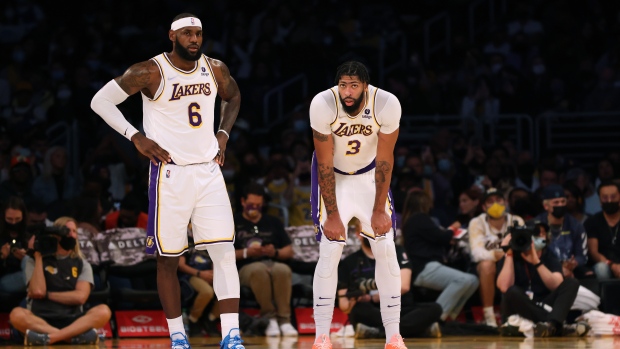 The Toronto Raptors will host a Los Angeles Lakers team missing both LeBron James and Anthony Davis on Wednesday night.

Lakers’ Anthony Davis (illness) and LeBron James (ankle) are out tonight vs. Raptors.

James is dealing with an ankle issue after registering 21 points, 17 rebounds and four assists in a 116-102 loss to the Cleveland Cavaliers on Tuesday.

Davis left the game against the Cavaliers in the first quarter with flu-like symptoms. Davis had scored a total of 99 points in his previous two games prior to Tuesday.

Lakers coach Darvin Ham said after the game Davis was unlikely to play against the Raptors, but also stressed the star centre had not tested positive for COVID-19.

Just past the quarter mark of the season, the Raptors sit even at 12-12.

The Raptors slipped to .500 with a 116-110 loss to the East-leading Boston Celtics on Monday. Pascal Siakam tallied 29 points, eight rebounds and seven assists in the defeat.

The Raptors are 5-5 in their past 10 games and enter Wednesday’s matchup in eighth place in the Eastern Conference.

TSN’s Josh Lewenberg writes that the Raptors are trying to solve a team-wide shooting slump.

After knocking down 39 per cent of their three-point attempts over the first eight games of the season, the Raptors are shooting 30 per cent over the past 16 contests, Lewenberg points out.

Only Charlotte has shot worse over that span. The Raptors are 3-6 when they’ve shot below 30 per cent from long distance, but on average, they attempted 13.3 more shots than their opponent in those three wins.