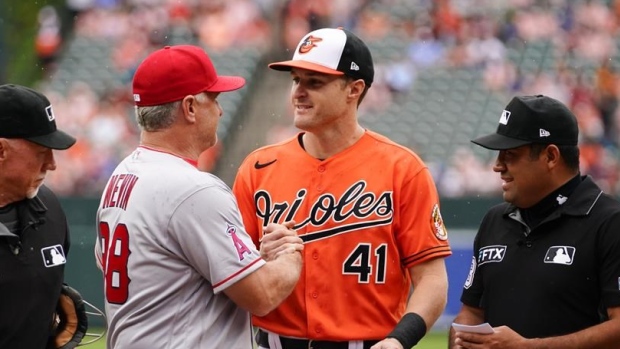 The Los Angeles Angels signed manager Phil Nevin to a one-year extension, removing the interim tag from his title.

Nevin, the former third-base coach, took over as manager upon the firing of Joe Maddon on June 7.

OFFICIAL: the Angels have agreed to terms on a one-year contract with Phil Nevin to become the team’s Field Manager. pic.twitter.com/tLgsWN9gyF

A native of Fullerton, CA, Nevin appeared in 1,217 games during his playing career with the Houston Astros, Detroit Tigers, Angels, San Diego Padres, Texas Rangers, Chicago Cubs and Minnesota Twins over 12 seasons from 1995 to 2006.

An All-Star with the Padres in 2000, Nevin eclipsed the 100-RBI plateau on three occasions.

Following his retirement, Nevin joined the Padres broadcast team before getting into management and joining the Tigers as the manager of their Double-A affiliate in 2010. He made the jump to the majors with the San Francisco Giants in 2017 before moving to the New York Yankees the following season, as a third-base coach with both clubs. He joined the Angels in the same capacity in the fall of 2021.

With the Seattle Mariners and Philadelphia Phillies both earning a playoff berth, the longest active playoff drought in Major League Baseball is held by the Angels and Tigers with neither team reaching the postseason since 2014.