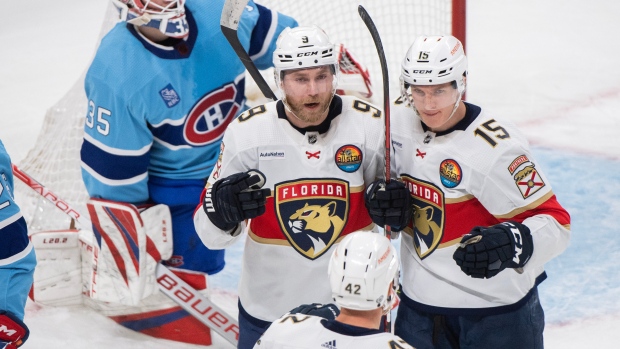 MONTREAL — Despite losing their starting goaltender just over two minutes into the game, the Florida Panthers held up just fine.

In his 25th NHL game, backup Alex Lyon kept Florida afloat with 23 saves en route to a 6-2 win over the Montreal Canadiens Thursday. Sergei Bobrovsky suffered a lower-body injury and left the game during a stoppage for a Panthers penalty.

“My approach remains the same and I just feel like there's a reason why I excel in these situations and I take a lot of pride in being able to be put in tough spots,” the 30-year-old Lyon said. “That's kind of my role in the organization, and kind of where I've carved out my career.”

The Canadiens power-play unit immediately tested Lyon upon entry when Cole Caufield ripped a one-timer, but the netminder denied him.

For Panthers coach Paul Maurice, that was the task and his team executed it perfectly.

“They're fresh, they're feeling great,” Maurice said of the Canadiens. “This is a great building to play in front of for the home team because you give (the fans) any reason, it gets loud and they get the energy, so that save was incredible for us. It just kept it quiet enough and let us build.”

Matthew Tkachuk scored twice in the middle of a five-goal second period for Florida (22-20-5). Sam Reinhart, with a goal and two assists, Sam Bennett, Givani Smith and Ryan Lomberg added the others.

Rem Pitlick and Josh Anderson replied for Montreal (19-24-3), in a game where 24 penalties were called, including six majors for fighting and three 10-minute misconducts.

“In the first period, we managed the game. In the second, we shot ourselves in the foot,” said Habs coach Martin St. Louis. “I don’t have a problem with our aggressiveness.

"I’m happy we held together in a frustrating game and it was our fault that we were getting angry because we were shooting ourselves in the foot.”

Anderson got Montreal's first scoring chance, hitting the post on a shot that broke his stick early in the first period. Bobrovsky appeared to get hurt on the play and exited.

“We had him in the room in between periods,” Maurice said. “I just changed my language a little bit so he doesn't tell anybody that the coach swears a lot. Good guy, Patrick. He hung out with us. We fed him after, too.”

Mike Matheson stopped Eric Staal in his tracks with a reverse hit late in the first period. Staal was slow to get up but headed to the locker room and did not return to the game.

"To see him get hit like that, it definitely lit a little bit of a fire under us,” said Lomberg. “We wanted to make sure that we got the two points because ultimately, that's what he wanted us to do. He didn't want us to get revenge. He wanted us to win so we did that.”

The Panthers broke the ice at 6:30 of the second period. Reinhart hopped on a rebound from the left faceoff circle and scored into a half-open net.

St. Louis challenged the play for goaltender interference but the goal stood as the video review didn’t deem Tkachuk interfered with Montembeault.

Florida took advantage of a Montreal delay of game penalty to score a second goal under two minutes later. Bennett redirected Gustav Forsling’s point shot to score his 11th of the season.

Tkachuk gave the Panthers a three-goal lead on the power play by patrolling the front of the net and tapping in a rebound past Montembeault at 14:58.

Smith bagged his first goal of the season by grabbing his own rebound just over a minute later.

The Canadiens took two penalties for too many men late in the frame. Montreal killed the first minor but Tkachuk whipped a wrist shot in from the right faceoff circle to complete Florida’s five-goal period with 43 seconds remaining in the period.

Pitlick put Montreal on the board at 2:12 of the final frame when he beat Lyon from a tight angle.

Anderson cut Montreal’s deficit to three with a one-timer from the left faceoff circle 8:06 into the third.

Lomberg redirected a centring pass from Carter Verhaeghe at 9:11 of the third to restore the Panthers' four-goal edge.

Maurice said post-game that Bobrovsky and Staal would both get evaluated on Friday.

The Canadiens lost a sixth consecutive game with their Reverse Retro uniforms. Montreal holds a 0-6-0 record while wearing light blue.

The Canadiens will clash with the Toronto Maple Leafs on Saturday.

The Panthers will return to Florida to host the Minnesota Wild on Saturday.

This report by The Canadian Press was first published Jan. 19, 2023.