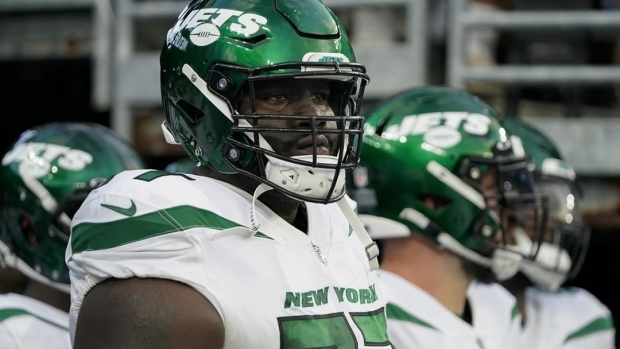 Becton was having a second evaluation after suffering a chip fracture to his kneecap, Saleh confirmed, during the second play of 11-on-11 team drills Monday. The initial prognosis was optimistic, but an MRI later in the day revealed more damage to the knee than first expected.

“It's probably the inevitable,” Saleh said of the severity of the injury. “I'm just sick for Mekhi.”

When asked to clarify if Becton's season appears over, Saleh said: “Yeah, it's more than likely.”

The 6-foot-7 Becton, entering his third NFL season, injured the same knee last year in the opening game at Carolina and missed the rest of the season. The latest injury is new and not related to the one last year when he suffered a dislocated right kneecap and cartilage damage.

“Everything happens for a reason,” Becton wrote on his Instagram page. “I know God and my Grandma got me up there I JUST KNOW IT! TRUST!#IMSTILLHIM.”

Becton was run-blocking at right tackle Monday when he went down on the grass and immediately grabbed at his knee. The 2020 first-round draft pick was down a few moments before trying to get up, but needed assistance from trainers to walk off the field.

He took off his pads and eventually walked very gingerly on his own to the locker room with a noticeable limp.

It's another major setback for Becton, who was adjusting to moving to right tackle this season after previously playing on the left side.