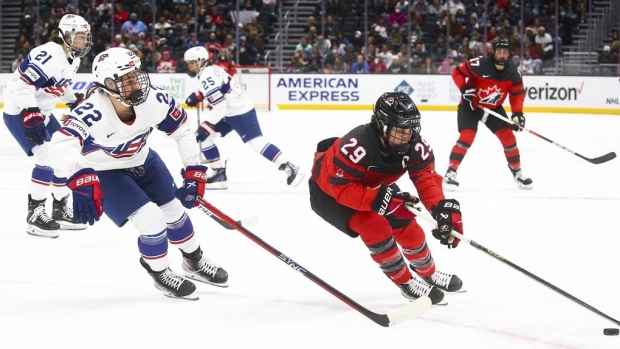 Hockey Canada released its 24-player roster on Wednesday for the games Dec. 15 in Henderson, Nev., and Dec. 19 in Los Angeles.

The Canadians will be looking for their first wins of the 2022-23 series after the United States posted three victories earlier this month in Kelowna, B.C., Kamloops, B.C., and Seattle.

The series will end with two games at a date and location yet to be determined.

Canada had won five of six games against its archrival before the start of the Rivalry Series, including victories in the 2022 Olympic final and the gold-medal game of the women's hockey championship.

Eighteen players who competed in the first three rivalry series games are on the most recent roster.

This report by The Canadian Press was first published Nov. 30, 2022.