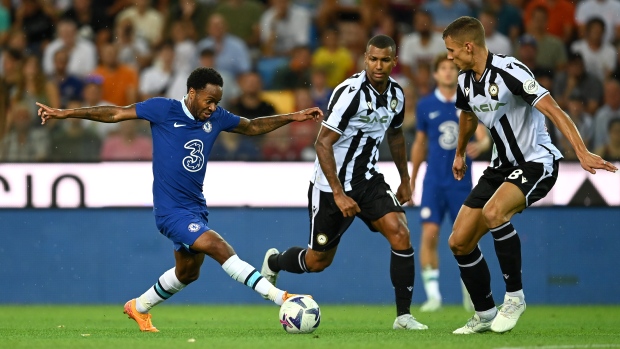 The 27-year-old England forward spoke ahead of the Blues' London derby versus Tottenham Hotspur on Sunday.

"Since I was 17 I've been a regular starter, and to get to the peak in my career, not to be playing regularly was something I wouldn't accept," Sterling said. "My personality is to try to fight and change the scenario, but it didn't come and that was it. As a person you strive to achieve, and I just felt my time at City was getting limited on playing time for different reasons. I couldn't afford to waste that time, so I needed to keep that same level and a fresh challenge."

Sterling joined Chelsea last month in a £47.5 million move after seven seasons at the Etihad.

While it was difficult to leave City, it was new Chelsea owner Todd Boehly's vision for the club that drew him to Stamford Bridge, he said.

"This was the option that was tailor-made to my personal goals, and with my family as well, and the direction the club is going in," Sterling said. "It's a team that's competing and only going to get better. With the new ownership as well, it made a lot of sense. It was tough, of course, with the time I spent at City and there's lots of memories and top moments. But the year and a bit that I was in and out of the team taught me a lot about myself, made me value a lot of things and I tried to get things in order. You have to make the decision that's best for yourself."

The Blues have won five straight matches against Spurs in all competitions and nine of their last 11.