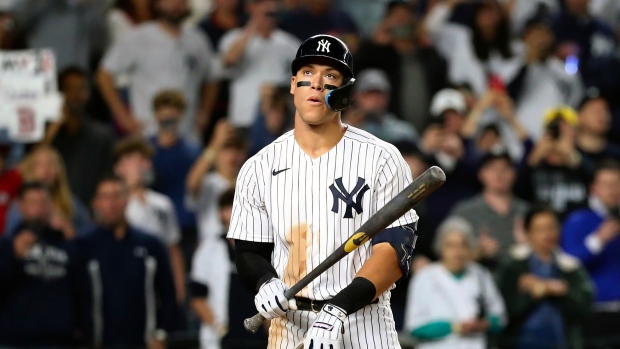 NEW YORK (AP) — Stunted by the rain Sunday night, Aaron Judge is taking his record chase on the road.

Judge remained at 60 home runs, one short of Roger Maris’ American League mark, when the New York Yankees' 2-0 victory over the Boston Red Sox was called after six innings because of heavy showers.

The big slugger went 1 for 2 with a double and was due up next for the Yankees when play was stopped. The game was called after a 98-minute delay, sending Judge to Toronto still in pursuit of Maris.

But the four-time All-Star insisted he wasn't disappointed that he was unable to hit No. 61 on New York's 6-0 homestand.

“You can’t think along those lines,” Judge said. “It’s not our last home game, so I’m not worried about it.”

New York has won seven straight and can clinch the AL East title with a victory Monday night over the Blue Jays.

Judge expects his parents will follow him to Toronto and be in attendance again.

“Oh, yeah. I hope so. They’re retired. They've got nothing to do. So they better be there,” he said.

The delay left fans at Yankee Stadium with a difficult decision: wait out a big storm holding out hope of seeing a historic moment, or head home before the hour got too late.

Many in the sellout crowd of 46,707 stuck around, but there was little audible reaction when the announcement came that the game was called.

Most fans had left their seats for dry cover on concourses and under overhangs. Some booed when umpires called for the tarp at 9:15 p.m., but torrential rain was soon pouring in the ballpark. Loud thunder and lightning flashes accompanied a heavy storm that lasted past 11 p.m.

“I was hoping the game would continue, but I was happy we were able to see him and hopefully he gets it done next homestand,” said Joe Kelly from Queens.

Judge has gone five games without a home run. Since connecting for No. 60 on Tuesday night against Pittsburgh to spark a ninth-inning comeback, he is 4 for 15 with three doubles, six walks and six strikeouts.

The closest he’s come to matching Maris’ 1961 mark was a 404-foot drive caught right in front of the center field fence Thursday.

The Yankees play a three-game series in Toronto beginning Monday, then return home for three games against Baltimore next weekend before wrapping up the regular season at Texas.

Judge led off the bottom of the first by grounding a double inside third base against rookie Brayan Bello (2-7). The slugger fought back from an 0-2 count to draw a walk in the third and was visibly disappointed when he flied out to center field on a hanging slider in the fifth.

Moments before play was halted, Boston right fielder Rob Refsnyder dropped a two-out fly ball as he looked up into the raindrops. The error allowed Aaron Hicks to score from first base, making it 2-0.

Bello then threw a called third strike past Oswald Peraza, ending the sixth inning with Judge on deck.

“I like to hit,” Judge said. “I think anybody would want more at-bats.”

With the rain intensifying, fans pulled on ponchos and opened umbrellas in the stands. Two umpires huddled with a member of the Yankee Stadium grounds crew in foul territory, and the tarp was rolled onto the infield.

“We’d love to see him hit 61, but at the end of the day we got the win,” said Billy K. from Queens, who declined to give his last name. "I know most of the fans came in to watch him hit the home run, but it is what it is. Hopefully he hits it in Toronto.”

Nestor Cortes (11-4) allowed one hit and struck out five in a rain-shortened shutout.

Bello also went the distance, giving up one earned run and six hits.

The loss eliminated the last-place Red Sox from playoff contention.

“We had a good team coming into the season and we just didn’t perform," manager Alex Cora said. "We were very inconsistent in a lot of aspects of the game and we’ve just got to get better.”

Judge started at DH for the 22nd time this season and first since both games of a doubleheader Sept. 7 against Minnesota. He hasn’t been out of the starting lineup since July 12, and manager Aaron Boone didn’t rule out resting the 30-year-old slugger while he’s still chasing Maris.

“I’m just kind of playing it day by day,” Boone said. “Hopefully we can get to a point where we have a few days to decide on which makes the most sense and how to rest him where we can.”

Yankees: INF DJ LeMahieu (right toe inflammation) remains a possibility for the upcoming series in Toronto, and Boone said he thinks and hopes the three-time All-Star and two-time batting champion will come off the injured list by the end of the regular season. ... RHP Frankie Montas (right shoulder inflammation) has yet to resume throwing and is unlikely to be an option as a stretched-out starter when the playoffs begin. But he could be available in shorter stints, Boone said. ... DH Giancarlo Stanton, 3B Josh Donaldson and SS Isiah Kiner-Falefa were given the night off.

A YANKEE NO MORE

INF/OF Miguel Andújar was claimed off waivers by Pittsburgh. Andújar was runner-up to Shohei Ohtani for 2018 AL Rookie of the Year.