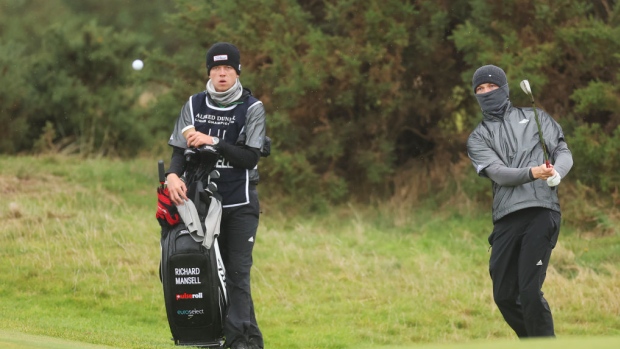 ST. ANDREWS, Scotland (AP) — English golfer Richard Mansell stood up to bad weather to shoot a stunning 4-under 68 on the Old Course and open a two-shot lead halfway through the Alfred Dunhill Links Championship on Friday.

Mansell carded five birdies and a single bogey to post the lowest round of the day and climb to 10 under par as strong winds and heavy rain made life difficult for the players at all three host courses.

Swede Alex Noren was alone in second place on 8 under following his 69 at Kingsbarns, and Dane Niklas Norgaard Moller and Frenchman Antoine Rozner were tied for third after 74s at St Andrews and Carnoustie respectively.

Home favourite Robert MacIntyre was another shot back on 6 under thanks to his 70 at Kingsbarns.

Having opened his second round at the sixth hole due to the shotgun start at all three courses on Friday morning, Mansell made birdies at the seventh, ninth, 10th and 12th to catapult himself to the top of the leaderboard.

But as the conditions worsened, birdies were suddenly off the agenda and the fight to avoid losing ground became the priority.

Mansell bogeyed the 16th but pulled off some significant par saves before notching a birdie at the fifth — his last hole — to head into the weekend with a two-stroke advantage.

Englishman Eddie Pepperell had a day to remember by making a magnificent hole-in-one at Kingsbarns’ eighth hole.

“It was a 6-iron, just trying to hold it up against a little bit of a right-to-left wind and it pitched online and just rolled down there, fed in,” Pepperell said."