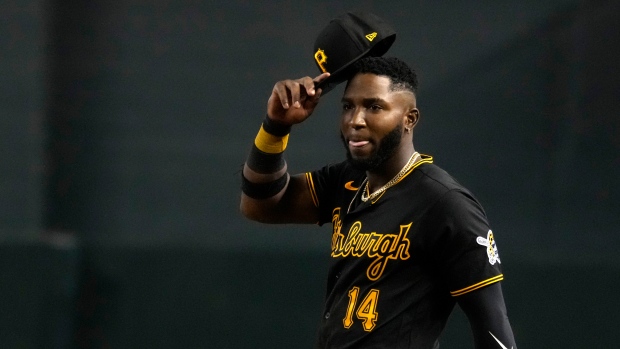 PHOENIX (AP) — Rodolfo Castro got the call-up and dropped a call in his return to the big leagues.

The Pittsburgh infielder lost his phone during a slide into third base and the Pirates lost to the Arizona Diamondbacks 6-4 on Tuesday night.

“You stay around the game and you see things you haven’t seen before,” Pirates manager Derek Shelton told Pittsburgh media members. “This was just a kid who made a mistake. It’s just one of those things we move fowrard from and tell him, ‘You can’t do that.’”

Rookie Tommy Henry (1-1) was sharp in his Chase Field debut, allowing a run on four hits in seven innings for his first big league win.

Castro made a different kind of noise after being called up from Triple-A Indianapolis — with his phone.

The second-year second baseman walked in the fourth inning and went to third on Oneil Cruz's single. Castro slid headfirst into the bag to beat the throw and the impact sent his phone flying from his back pocket.

Third base umpire Adam Hamari immediately saw the phone and pointed to it on the ground. The 23-year-old Castro picked up the phone and handed it to Pirates third base coach Mike Rebelo, who had an exasperated look on his face before taking it.

Shelton said Castro put his oven mitt-like sliding glove in his pocket and forgot about the phone.

“I thought the umpires handled it very well and did a good job,” Shelton said. “There was no intent to do anything. He made a mistake and kept his phone in the pocket.”

Major League Baseball has cracked down on technology being used on the field since the Houston Astros used live TV feeds to steal opposing teams’ signs during their run to the 2017 World Series championship and part of the 2018 season.

Astros general manager Jeff Luhnow and manager A. J. Hinch were suspended for the 2020 season. The Astros also were fined $5 million and forfeited their first- and second-round picks in 2020 and 2021.

No word on if Castro had the ringer on vibrate.

Mark Melancon worked around a walk in the ninth for his 16th save. Zach Thompson (3-9) took the loss.

Henry had an uneven big league debut against Washington on Aug. 3, allowing four runs on four hits in five innings.

The rookie left-hander was efficient in his first big-league home game, keeping the Pirates off-balance until Chavis hit a solo homer in the sixth inning.

Chavis also hit a two-run homer off Chris Devenski in the eighth inning to pull Pittsburgh within 6-4.

Thompson was shaky his previous two starts, allowing 14 runs in 11 innings. The right-hander was back on track against the Diamondbacks, allowing two runs on five hits in 4 2/3 innings.

Hummel, who primarily played outfield in his first stint with Arizona, will back up catcher Carson Kelly. Hummel hit .171 with two homers and 11 RBIs in 50 games with the Diamondbacks earlier in his rookie season.

Herrera hit .189 with five RBIs in 47 games with the Diamondbacks.

The Pirates optioned OF Cal Mitchell to Triple-A Indianapolis when they called up Castro. Mitchell hit .204 with four homers in 44 games with Pittsburgh.